Masquers’ presentation of ‘”The Birds: A Modern Adaptation” to be Fall’s final show 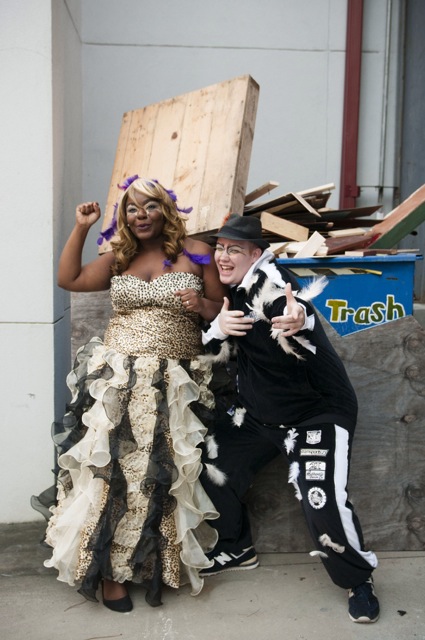 Walk around anywhere backstage at Jenkins Hall and you will see feathers of every color wafting about. That’s because the ASU Masquers have been rehearsing for its hysterically funny final play of the Fall semester.

Nov. 13 will mark the opening of ASU Masquers play, “The Birds: A Modern Adaptation,” by Don Zolidis.  The  modern farce is based on the Aristophanes play, “The Birds”, written around 414 BC.

The plot begins with two miscreants fed up with a world of petty problems in Athens. They decide to flee to the Kingdom of the Birds for a simpler life.

The two friends scheme up a plan to turn the kingdom into a powerful utopia with their only obstacle being the wrath of the Gods.  It is a hilarious, satirical take on the issues that make a modern society tick like urban sprawl, therapy, bigotry, credit cards, pollution, wealthy corporations, shifty insurance salesmen, and yes, Home Depot. This all occurs while remaining faithful to the themes of Aristophanes’ original version.

Dr. Peter Mellen feels like Zoldis’ adaptation captures the essence of the Aristophanes comedy, but the updates have been made to reflect tropes of modern society. Many of the same problems that plagued ancient Greece are still evident in our modern world.

“Crowded cities, crooked politicians, religious beliefs and the general feeling that everyone is out to get you still exist today,” Mellen said.  “The very utopia that the men sought to create, eventually became the corrupt city that they previously had fled.”

The setting of the play is the Kingdom of the Birds, oddly resembling a modern landfill. The collaborative visions of Mellen and Technical Director, Megan Baptiste-Field are located in the sky between Mount Olympus and the earth.

The two men, Pisthataerus and Eulipides, played by Tristan Carlson and Daniel J. Hilton, respectfully ascend a mountaintop to the kingdom. Here they convince Epops, the king of the birds and former human, to create a new utopia by building a wall separating humanity from the Gods.

The birds, who are representative of the Greek chorus, speak in rhyming couplets and argue amongst themselves constantly, ignoring the power of the king.  Fearful of the humans at first, they eventually welcome them into the flock, making them honorary birds.

Finally, the men take control of the kingdom and take the Gods to task with disastrous, yet absurdly amusing results.

“The script is funny and finds the humor in bad situations,” senior Theater major Hilton said. “Every night gets even more clever and entertaining because everyone does something new.”

The play is a great way to reduce stress and laugh and enjoy the evening as students prepare for the final push at the end of the semester.

Costume designer, Vicci Lanciotti-Towns found some specific challenges for the play.  While the bird characters are dressed in human clothing, all costumes were designed to reflect the specific species of bird or animal portrayed. She felt the materials used to construct the costumes could be difficult to work with at times. “This has been such a fun show, but the feathers and fur are everywhere!” she said.

Performances of “The Birds: A Modern Adaptation” are Thursday, November 13 through Saturday, November 16 at 7:30 pm, with a Sunday Matinee at 3:00 pm.

Tickets are now available at the Fine Arts Box Office from noon-3:00 p.m. Monday through Friday, or can be purchased online at tickets.armstrong.edu.  Tickets may also be purchased at the Jenkins Hall Box Office one hour before the performance.

Discounts are available to military, seniors, alumni association members, students and children.  Armstrong students, faculty and staff are free of charge with a valid PirateCard.