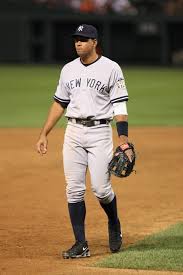 Alex Rodriguez just can’t get out of his own way. The 39-year-old New York Yankees third baseman is in hot water again with Major League Baseball as he is now the target of steroid distribution allegations.

Rodriguez was suspended for 162 games by baseball in 2014 for the “use and possession of performance-enhancing drugs.” In recent days, baseball officials have learned that Rodriguez confessed this much to DEA agents back in January.

A-Rod was one of nine players involved in the Bio-genesis steroids case that gained immunity from the government in exchange for testimony. Tony Bosch was the owner and founder of Bio-genesis, a shady steroid distributor based in South Florida. Bosch, or “Dr. T” as Rodriguez knew him, supplied PEDs to A-Rod, along with Ryan Braun, Francisco Cervelli, Melky Cabrera, Nelson Cruz, Manny Ramirez, and others. When Bosch’s practice was forced to shut down, Rodriguez (allegedly) paid for the PEDs of 20 Biogenesis customers in order to prevent Bosch from talking to authorities. As we now know, Bosch eventually did talk to the authorities. This is what led to the most recent Rodriguez allegations. Is it possible that Rodriguez can now be suspended by MLB again? This time, for the sale and distribution of steroids? For his sake, lets hope not.

It is clear to anyone that follows baseball that Alex Rodriguez is not your father’s type of player. He isn’t the first to arrive at the ballpark, and he isn’t the last to leave.

Since arriving in New York, Rodriguez has basically been the darkest and largest stain on the fabric of baseball, and it now seems like that stain could get worse.

Although Rodriguez has, according to Ken Rosenthal, “a slim chance” of being suspended for distribution of steroids, the fact that he is still involved in these investigations points to a larger problem in the A-Rod saga. The problem, expressed simply, is that the game of baseball has missed its opportunity to connect the dots of steroid usage in baseball. Sure, they have Rodriguez, his reputation is all but destroyed. However, just because they have uncovered the Rodriguez secrets doesn’t mean that MLB really did anything of merit.

Steroids were clearly being distributed on a large scale throughout baseball directly under the noses of baseball’s higher-ups; and therein is the problem.

The fact of the matter is that A-Rod, like so many other players, got away with blatant cheating for a decade while MLB officials looked the other way. It is only now, some 15 years later, that baseball is trying to save face.

By nailing Rodriguez for everything he’s worth, baseball can puff its chest out and say they solved the PED issue. But we know better than to believe that nonsense right? In reality, baseball failed. It failed us–the fans, by not taking preventative measures to stop the growth of steroids when it began in the late 1990’s.

Now it seems A-Rod will pay the price for all players involved. I don’t feel bad for Rodriguez, he probably deserves whatever is coming to him, but his continued saga should enlighten fans everywhere.

The man cheated, but let me ask you a closing question: Which one concerns you more as a fan? The fact that A-Rod cheated, or the fact that he cheated with hide-and-go-seek like ease?