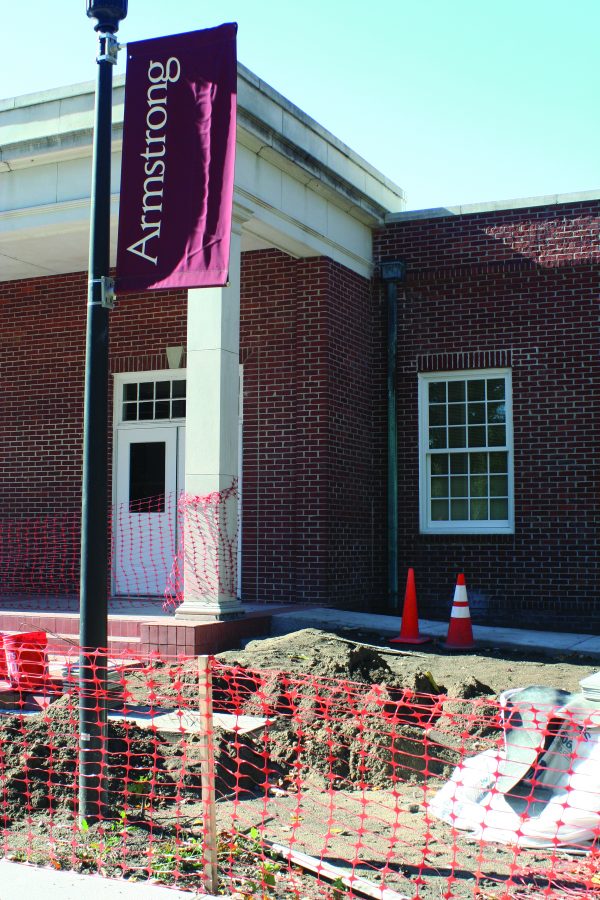 In 1990, Jesse Stuart Shearhouse, a former student of Armstrong passed away after becoming ill due to an inoperable brain tumor.

Mr. Shearhouse had never married, thus he had no one to leave his estate to. He chose to give back to Armstrong, the school he attended for two years before graduating from Emory University in Atlanta. Shearhouse requested in his will that 10% of his estate be placed into a trust, and 90% of that would be donated to Armstrong.

Thanks to Mr. Shearhouse, many students have received scholarship funding to attend Armstrong. In order to continue his legacy, the school has started the construction of the Shearhouse Plaza located between Hawes Hall and the Learning Commons.

Katie Twining, Director of Facility Services said, “The renovation of Shearhouse Plaza is the final phase of a multi-year capital project, J-161 Library Renovations that began back in 2011. The entire capital project was funded with a combination of state bonds and institutional funds.”

Twining continues, “J-161 began in 2011 with the renovation of several suites at the Armstrong Center.  This was to be the new home of IT Services, which originally resided in the annex of MCC.  Once this renovation was complete, IT Services moved to their new home and construction began on the vacated MCC Annex.  This would turn the Annex into The Learning Commons, which opened in June of 2013.”

When asked about project completion Twining commented, “The last phase of the project was to complete a renovation of Shearhouse Plaza, which began during the summer of 2014.  The renovation included new patios at the east and north entrances to the Learning Commons and the north patio of the food court, new patio furniture, new sidewalk connections, and the re-pouring of sidewalks between the Sports Center lot and Science Drive that were damaged during the construction of the Learning Commons.”

With all of the construction happening, especially near academic buildings where classes are held, some issues were bound to occur.

“Structural issues related to the MCC columns outside of the food court were noted as the site was being prepared.  This lead to substantial delays for the project, as well as additional costs,” Twining said. “We also incurred some delays toward the end of the project due to incorrect masonry items being delivered and some minor issues with completion dates for some of the sub-contractors. In total, the project was delayed by approximately two months. This had a significant impact on students, staff, faculty, and visitors to the campus, and specifically to the Learning Commons.  We did receive some complaints, but by and far everyone has been extremely patient during this renovation.”

With that said, renovations have been complete, but for the next two weeks contractors will still be on campus to re-pour some sections of the sidewalks.

Twining ended the interview by stating, “We hope this renovation provides a pleasant outdoor gathering area for everyone at Armstrong.  This can be an area for study, for socializing, or for programming. In years past, Shearhouse Plaza was used frequently for evening events such as small bands and open-mic nights.”