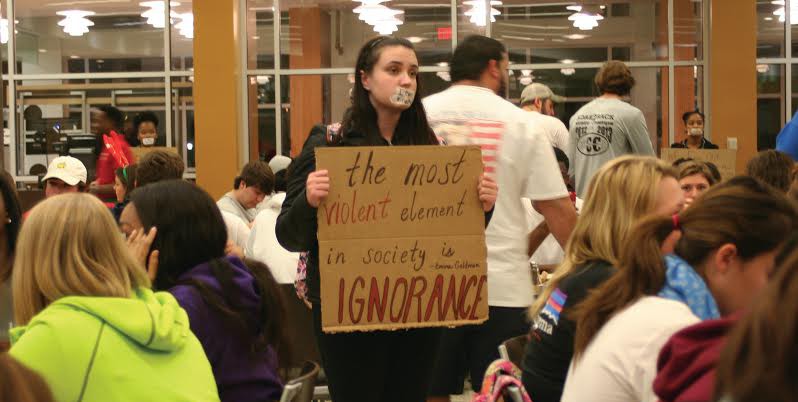 Roughly 30 people barricaded The Galley entrance, some standing with signs and others lying down on the floor. Passersby stopped, stared, took pictures, talked amongst themselves and some even joined in on the movement. The protestors were the center of attention among the crowd of students who were waiting for The Galley to open for a midnight breakfast.

Students expressed mixed feelings on the protest that acknowledged recent injustices in the Mike Brown case, Eric Garner case and the missing 43 students in Mexico.

Armstrong police were on standby, but the protest never became violent.

The administration decided to open the back doors of The Galley since protesters successfully blocked the front entrance.

As students made their way to the back door entrance, protestors joined them with pirate cards in hand in order to continue the protest inside The Galley. Once inside, each of them picked a spot and stood with their signs for half an hour while the initial rush of people came for breakfast.

No protesters stood in the way of the food service, drink or silverware areas.

“It’s bullshit. People aren’t willing to hear the facts. I don’t agree with people dismissing things like Mike Brown robbing a store,” Freshman Nursing major Trenton Chatland said. At 10:30, the protestors filed out of The Galley together to the sound of people clapping, laughing and making various comments.

“I love it; I stand for it,” Junior Criminal Justice major Rin Culberson said. “I think it’s pointless, it’s not going to change anything,” Freshman Engineering major Luke Peterson said.

“I like to see the school support the causes,” Junior Communications Science major Brianna Reed said. “It’s very peaceful and it’s not only one race. Everyone is coming together.”

Protesters claim that their signs and presence are enough, emphasizing that the protest was silent and civil. They represented injustice and hope that the movement promotes education of the matters at hand.