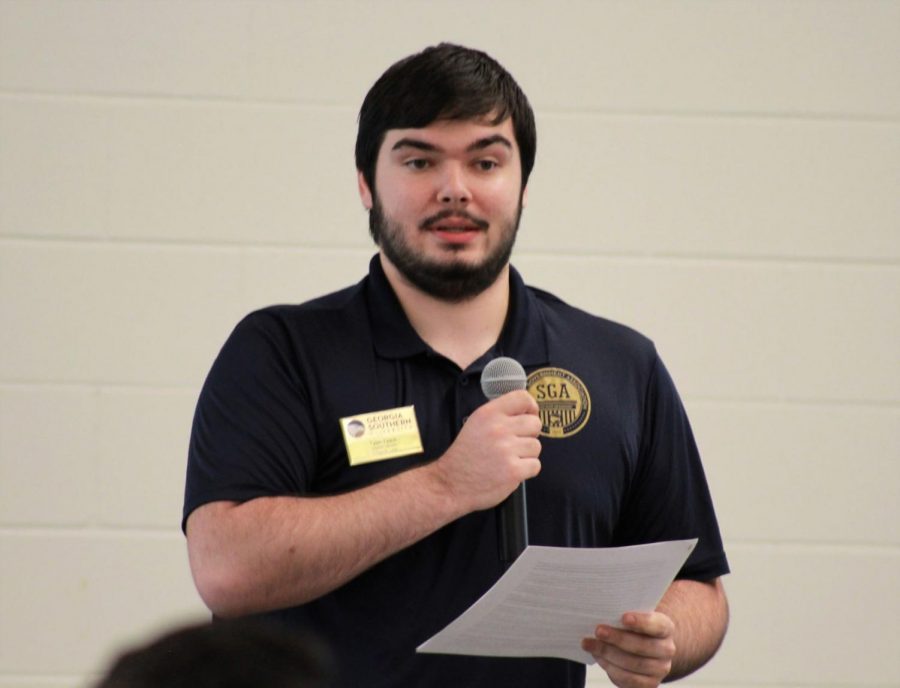 Armstrong SGA Speaker Tyler Tyack speaks out in defense of his legislation calling for the recent changes to this year's commencement to be immediately reverted by the president's cabinet.

A resolution calling for the recent changes to Georgia Southern University’s commencement ceremonies to be immediately reverted has been passed at a Student Government Association convention Saturday.

SGA members from all three GS campuses gathered at a joint session in order to vote on pieces of university-wide legislation. One of these proposals was a resolution initially authored by Armstrong SGA Speaker Tyler Tyack.

The resolution was passed by the Armstrong SGA senate and then recently voted down by the Statesboro SGA senate on Feb. 20.

Along with calling for the president’s cabinet to immediately revert the changes which have been recently made to the commencement process, Tyack’s resolution calls for a new plan for commencement to be created by a committee made of up students and faculty from all three GS campuses.

“I think that we as the SGA have done our job,” Tyack said. “We have represented the students to the administration. We can finally say together as three campuses and 21,000 students, ‘We want things changed.'”

The final tally of votes cast by SGA representatives on the resolution was 31 yes votes, two no votes, and five abstentions.

Once passed, university-wide legislation goes to SGA President Jarvis Steele to be signed. Steele confirmed that he does intend to sign the resolution.

{{tncms-inline content=”&lt;p&gt;&quot;I don&amp;rsquo;t know what I would’ve done if I was able to vote,&quot; Steele said, &quot;but one thing I will say is if my senators feel like they&amp;rsquo;re representing their constituency, then that&amp;rsquo;s all you can really ask them to do, correct? Their job is to represent the constituents. And if they feel like that&amp;rsquo;s what they&amp;rsquo;re doing, then I&amp;rsquo;m on board with whatever they feel like.&quot;&lt;/p&gt;” id=”4b0f32c9-c391-4cf9-9b03-da5d38f57940″ style-type=”quote” title=”Steele quote” type=”relcontent”}}

One proponent of Tyack’s resolution during the debate leading up to the final vote was Statesboro senator-at-large Keyshawn Housey, who was absent from the Statesboro SGA senate meeting where the resolution has previously been voted down.

“We can tell them that we did try,” Housey said. “Personally I do not believe that any changes will be made to this semester’s commencement, but for the future I hope we can have a say.”