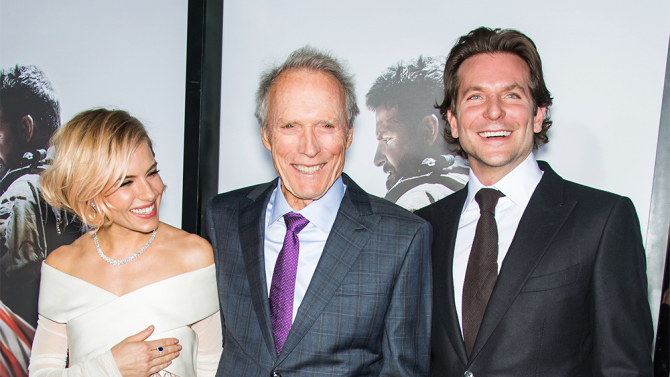 Clint Eastwood is a Hollywood legend. After starring in numerous action movies and westerns, he has now made a name for himself as one of the most respectable directors working today with such films as “Unforgiven”, “Mystic River”, and “Million Dollar Baby”. Now, at the age of eighty-four, he has made one of the intense and ferocious films of the year in the form of “American Sniper”, and there has been no shortage of controversy surrounding the project. Is this film simply propaganda? Does the movie overlook and ignore many of the negative qualities of its subject? Perhaps. While there are many areas left unexplored, what Eastwood has done is produce an unflinching look into the experiences of Chris Kyle, and in the process, make one of the most engaging and realistic films of his career.

Bradley Cooper stars as Kyle, a U.S. sniper nicknamed ‘the legend’ due to his record as having the most kills in American history. The story follows Kyle from his basic training through his time spent overseas after the attacks of 2001, while also delving into his home life with his wife Taya (Sienna Miller). Although his experience in combat is brutal and traumatic, it is his time spent stateside as a husband and father that ultimately brings his toughest challenge.

First off, it is easy to allow personal political beliefs to unfairly criticize Eastwood’s film. This is a look into the life and experiences of Chris Kyle which allows viewers to understand what he went through without concerning itself with the political nature of the war itself. This is a depiction of what this man actually lived through.

Eastwood has a way of making his films in a straightforward and relaxed way that does not depend on heightened music cues or plot contrivances to force elements of the work to feel more exciting or suspenseful. The drama comes from the situation the characters find themselves in and evolves naturally, which allows the action sequences and more emotional moments to resonate more with the audience and feel earned rather than exploited.

While the pacing and tone of the movie works, the story itself is a bit lackluster. There have been many films that depict the grittiness and devastation of war, and even more that delve into the confliction and anguish of returning home, but ‘Sniper’ fails to say anything that has not been expressed before in films such as “The Deer Hunter” or “The Hurt Locker”. It is Cooper’s performance as Kyle that truly makes this film worth watching. After playing more light-hearted characters in “Silver Linings Playbook” and “American Hustle”, here is a part that Cooper truly loses himself in while revealing a darker edge that moviegoers have only seen glimpses of. Miller is also very good as Taya, but her character is not given much to do other than deal with the emotional conflicts of Cooper’s Kyle.

Here is a strong work by Eastwood that depicts the harshness and violence of Chris Kyle’s tours of duty and the emptiness and challenges of becoming part of civilian life again, but “American Sniper” ultimately misses its mark of being a great film by failing to offer audiences anything that has not been said many times before.