Man arrested after driving into lake on Georgia Southern campus 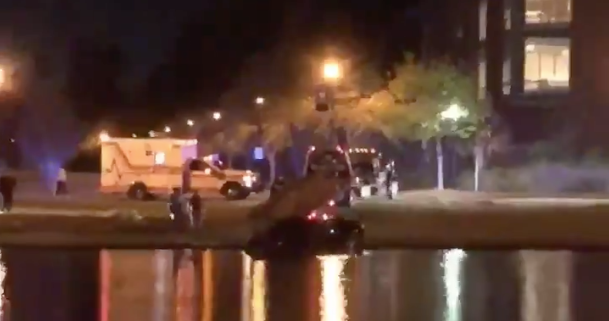 A man crashed his car into the lake in front of the nursing building Tuesday night. Photo courtesy of https://twitter.com/retweeks

A man was arrested after driving into the lake in front of the Georgia Southern Nursing building Tuesday night on accounts of driving under the influence and failure to stop at a stop sign.

According to a Bulloch County police report, Shannon Shepherd of Savannah drove his Dodge Charger northbound on Akins Blvd. and went through the intersecting stop sign at Forest Drive.

“Vehicle #1 traveled on the shoulder for approximately 59 feet before entering a pond,” the police report states. “Vehicle #1 eventually came to an uncontrolled rest, completely submerged.”

One of the witnesses was sophomore marketing major Rosie Dudacek who was on her way home from work with a coworker.

“We noticed he wasn’t slowing down for that stop sign right there, so we slowed down to watch him,” Dudacek said. “He just ended up going straight into the pond.”

Dudacek explained that there was another car with two women that stopped at the scene after nearly being hit by Shepard. The four witnesses urged the driver to evacuate the car.

“The car just immediately sunk,” Dudacek said. “We [told] him to roll down the window and he finally did. He jumped out of the car through the window.”

Videos of the car heading into the lake went viral on various Twitter accounts.