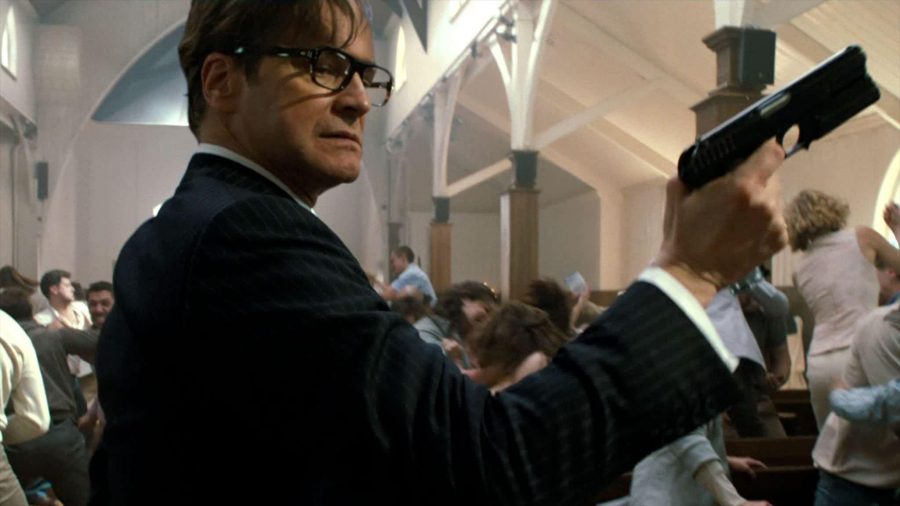 Director Matthew Vaughn and Graphic Novel author Mark Millar teamed up back in 2010 to bring “Kick-Ass” to the big screen.

The film opened to enthusiastic audience response, generally favorable reviews, and a fair amount of skepticism directed at the nature of its violence and darkly perverse sense of humor. While the action sequences were highly praised and the writing was well received by critics, there was concern over the highly stylized and extremely graphic violence, most of which revolved around a young girl named Hit Girl. Now, five years later, Vaughn and Millar’s new film “Kingsman: The Secret Service” offers the same type of moviegoing experience: fun, thrilling, and shockingly violent.

What “Kick-Ass” did for the superhero genre with a healthy dose of homage and critique, ‘Kingsman’ does for the spy films of the 60s, 70s, and 80s. Colin Firth stars as Harry Hart, a British secret agent donned with the task of finding a recruit to fill the position of a recently slain member of their Kingsman organization. Hart sets his sights on a troubled youth who goes by the nickname Eggsy (Taron Egerton), who possesses a skill set that makes him a worthy candidate despite his background. As training begins, a rich entrepreneur called Valentine (Samuel L. Jackson) concocts a terrorist scheme so unlikely and devastating that even the Kingsman agents are unprepared for the destruction to come.

While the setup seems generic and straight from any spy movie from the past five decades, Vaughn infuses his film with a satiric edge that not only homages the past works, but improves upon them. Vaughn is so skilled and sharp that he is able to make jokes and subtle critiques of franchises like “The Avengers” television series and James Bond without ever making ‘Kingsman’ a spoof or parody. This film is able to work on its own terms without simply being reduced as a tribute or takedown of those other works.

Every scene is filled with absurd and irreverent humor. The action scenes are spectacular, with one sequence towards the finale featuring Harry Hart quite possibly being one of the most entertaining fight scenes in recent years. The way Vaughn chooses to shoot and choreograph action is incredibly refreshing because of his ability to allow the audience to understand and comprehend what is happening in these sequences without the interference of rapid editing or shaky camera work, which is mostly used to cover up for filmmakers who do not know how to film these scenes convincingly.

Firth, who has made a career for himself playing charming romantic leads, makes a surprisingly enjoyable action star. Of course there is some use of computer generated imagery and stunt doubles, but Firth actually performs the majority of his fight scenes himself which shows in the final work. His charm and personality is perfect for Hart, and his performance is as entertaining as it is moving. Jackson has played villains before, but the script is so smart and his character is so rich that his boisterous personality is utilized in a way that is both unexpected and bold. Newcomer Egerton holds his own against Firth and Jackson, as well as supporting players Michael Caine and Mark Strong. He nails every nuance of his character’s development from troubled misfit to super spy.

The performances are spot on, the action is top notch, and the writing is clever, dark, and most importantly, smart. “Kingsman: The Secret Service” is a hard R, not the safe and studio friendly PG-13, and it uses that freedom to go further than any Bond film ever dared to go. This might turn off some, but those craving an action movie from a director who is not afraid to be crazy and extreme will be entertained.