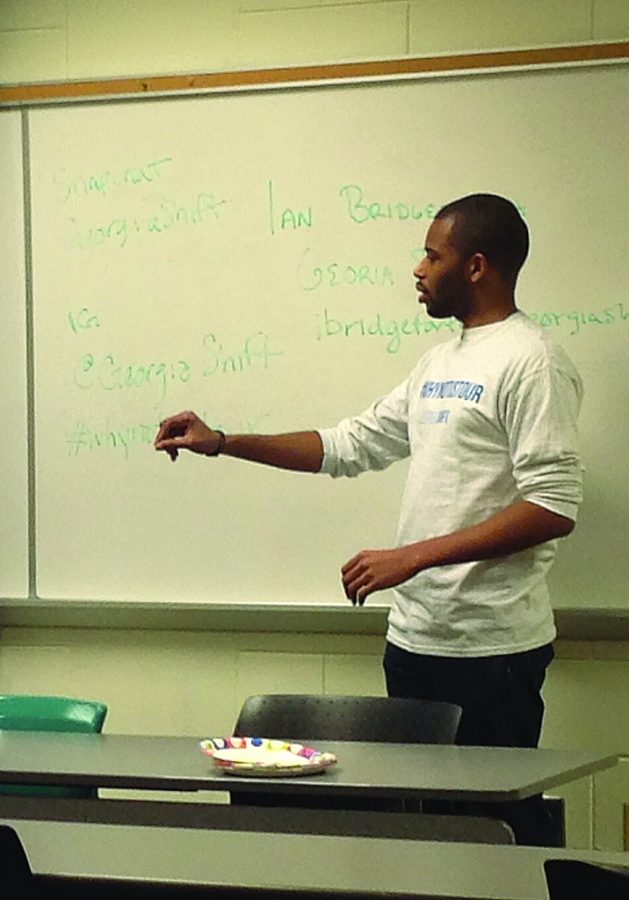 Aspiring student advocates took advantage of the Georgia Shift Why Not Us tour seminar Feb. 12 to learn more about fighting for causes on college campuses.

The tour is hosted by Ian Bridgeforth, he started the Georgia Shift program about seven months ago. With a degree in mass communications from Georgia State University and a marketing background under his belt, Bridgeforth has set out to inform college students about being advocates on their campuses.

“There’s a disconnection between young people, campaigns and politicians,” Bridgeforth said. He noted that older men in politics can be condescending to young people, therefore leaving a large population overlooked and unheard. To solve this problem, he wants to engage young people in issue-based advocacy and train them to be leaders.

He has a lot of faith in college-aged students, claiming that they are caring and determined, but can also be impatient. Bridgeforth advised that once a group finds passion for a cause, the most important thing to do is research niches within that area of interest.

It is also a good idea to reach out to community organizations for help and inspiration, but focus on doing tasks on campus. “Use other organizations’ leverage to raise yours,” Bridgeforth said. “Saying you’re collaborating with a larger entity is a good thing. Work together because you can’t do everything yourself.”

He stressed the importance of using resources and allies. Students can be respectable and stern at the same time when telling an organization upfront how they can help.

He also discussed the importance of a social media presence and how to use different sites effectively. Bridgeforth discourages using social media to display every little detail about a group’s cause, but instead using it to tell a story by building the audience’s trust with authenticity.

Social media is also a tool for creating connections with organizations that are difficult to contact.

He advises to retweet and engage with other people more than you tweet about yourself.

For junior psychology major, Luisa Rovira, Bridgeforth’s advice was useful and is applying it to starting a wellness group on campus called AWIN (Armstrong Wellness Initiative). “It was really helpful,” Rovira said. “Even though this is about advocacy, it helps with what I’m trying to do, which is get allies and people to be a part of my club.”

A few of the other clubs in attendance included Go Green Armstrong, Feminist United, Amnesty International and the Gay Straight Alliance. All were there to gain skills on how to better develop their advocate groups.

“You may hear that you need more experience, but you don’t really learn until you get in the game,” Bridgeforth said. “Jump in and don’t be afraid.”