From the Slave House to the White House 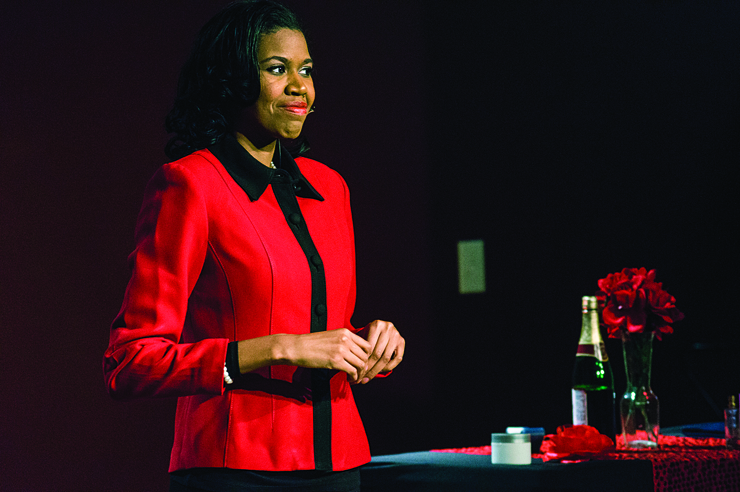 From The Slave House to the White House was held at the Ogeechee theater on Feb. 25.

Morgan Avery McCoy covered the transformation from their origins of being sold into slavery back in Africa to the emergence of black people in prominent American society.

Actress Morgan Avery McCoy is a minister, author and motivational speaker who taught at the collegiate level after earning her BA in theater from Hampton University and her MA in communications from Regents University.

McCoy had been drawn to the stage since age 14 when she recited her monologue as Coretta Scott King for a debutant pageant. It was there that she discovered her talent for performing, which would lead her to her current occupation: performing a 12 person play by herself.

McCoy’s Characters are in chronological order, each punctuating significant time periods in history, and capturing the essence of what it was to be a black female in that particular era.

Some characters have stories of triumph, such as Madame CJ Walker, the first Black Female Millionaire in US History,  Maggie L Walker, the first female of any race to be the president of a bank, and Rosa Parks and First lady Michelle Obama.

Despite the number of years she has spent performing, McCoy says she still gets nervous before every performance. She turns it into adrenaline and it fuels her to give a convincing performance and once she hits the stage. “It’s like a switch,” McCoy said.

Armstrong was the fourteenth stop on McCoy’s national 30 campus tour with her play, but she confessed she couldn’t do it alone. “I have a  national team 10 members strong, but I realize they have lives and responsibilities and they can’t always travel with me, that is why I am always grateful for my parents who are always there for me.”

Some of the places McCoy has highlighted on her remaining trip are her travels are to Ohio and Indiana where she will be visiting for the first time. McCoy’s life mission is to A.C.T (Advocate Change and Transformation) and encourage people to always follow their dreams. McCoy said, “I just hope that everyone who comes to see my play only takes away one thing, and is that everyday, strive to get better. If one of us makes it, then we all make it.”