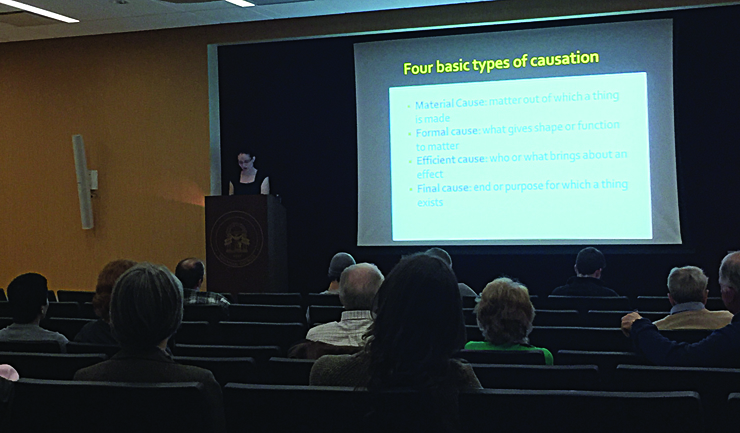 On March 6, Dr. Julie Swanstrom led a faculty lecture in the Ogeechee Theater. Swanstrom has degrees in the areas of philosophy, theology, and history, and is Assistant Professor of Philosophy at Armstrong. Her lecture addressed the tracing of the conceptual shift in how we think about the causes of things.

The shift of how we think is divided between the two philosophers: Darwin and Aquinas. Swanstrom went in depth about the similarities and differences between the two theologies, explaining that Darwin felt that changes occurs in response to the pressures of natural selection, and that the opposing argument held by Aquinas states that change occurs because there is no other option, which would result in the change causing the object to be inferior to its previous form.

“The presentation was very informative, especially if philosophy is your major,” freshman Lily Hurd said after the lecture.

Throughout the presentation Swanstrom put emphasis on there being primal cause and secondary cause. Darwin explains the natural evolution of species through secondary cause. He does this almost as if to avoid the combination of religion and science. Aquinas on the other hand is very religious and includes religion with science. Darwin believes natural selection is a form of survival and Aquinas says natural selection is God’s will.

From the lecture, it is also understood that Darwin and Aquinas both shared common view on the topic but there is a grey area. This is where they split into two because Aquinas sees origin from a religious perspective and Darwin is viewing origin from a strictly scientific standpoint. “I learned that everything we have learned so far is just the surface of what we have left to learn,” freshman criminal justice major Kityara James commented.

The theater was filled with not only numerous students, but other members of the faculty too, such as Dr. Winterhalter, who said that she attends every lecture she can to support the intellect of the staff. “All faculty lectures are important and the professors of the university deserve to know that their work is important and that they are appreciated,” Winterhalter said.

Dr. Julie Swanstrom’s lecture was the fourth of the semester. She executed her presentation well, setting the bar higher for later lectures to come. “I hope more students will come to the faculty lectures and support their schools teachers,” Swanstrom said.