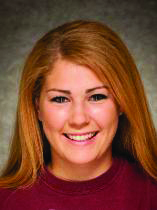 Sophomore Jane Trzaska stole the show with the Pirates first no-hitter in seven years to win game one and gain momentum for a series sweep of Peach Belt Conference opponent Lander University in Greenwood, S.C. on March 21.

In game one, Offensively, both teams were pretty quiet until the top of the third when Trzaska homered to left field, bringing in freshman Autumn Parrish and senior Alexis Mercer. Shortly after, junior Michelle Breen also homered, this time to center field.

Then junior Sierra Newman singled to the to center, allowing senior Rachel Reynolds to score for the Pirates. Mercer singling to third base brought Newman home, concluding the top of the third with six runs for the Pirates.

“I think this was a really great start for our conference and got us moving in a positive direction. The teamed played really well and I can’t wait to see how we do as the season goes on, we look really good,” Trzaska said.

In game two of the doubleheader, the Pirates started strong with a Newman RBI triple in the second inning to give Armstrong an early lead. Breen added to the Pirates lead in the third with an RBI single and Reynolds scored a two-run double, making the score 4-0.

Lander responded in the sixth inning with a sacrifice fly by freshman Halie Sorrow, scoring the Bearcats only run of the day.

The Pirates will retake the field for a double-header against USC Aiken, Sunday at 1 p.m. in Aiken, S.C.