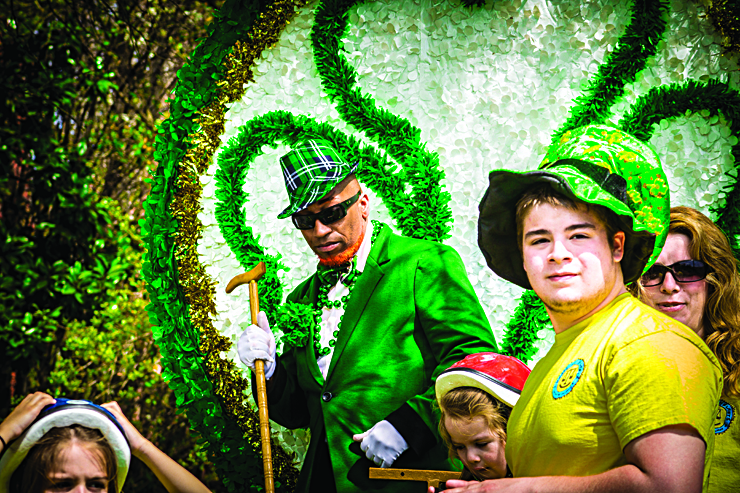 The middle of March is the time of year when Savannah residents and visitors dress up in their favorite green attire and celebrate one of the largest St. Patrick’s Day festivals in the world.

This year marked the 191st celebration of the St. Patrick’s Day festival. The traditional dying of the fountain in Forsyth Park on March 7 signified days of green fun to come for Savannah.

The festival ended March 17 with the annual St. Patrick’s day parade through downtown. The weekend before brought many visitors to the historic district even though the holiday wasn’t until Tuesday.

Locals and out of town visitors cruised the streets all weekend while stopping into Savannah’s pubs for cups of green beer and to eat at restaurants, who were selling food and drink specials all weekend to keep the festive atmosphere alive throughout downtown.

Clearly the city of Savannah has done this before because there was no shortage in security or waste management teams on the scene to preserve the historic beauty and so nothing got out of hand.

Booths were set up at intervals to purchase wristbands. The wristbands generate revenue for funding the extra staff needed for the festival and also ensure that festival patrons are old enough to drink.

A significant amount of police officers were on horseback, bicycles and on foot patrolling to ensure public safety. “The bottom line is we want everyone to be safe,” officer Kate Williams said. “We just want to make sure that everyone leaves downtown the same way they came in.”

According to the official St. Patrick’s Day Parade Magazine “The beginning of the parade was led by Grand Marshall Hugh E. Coleman III, and featured over 350 units, including military divisions, and bands including the Bishop Moore black and Gold Bagpipes, the Dublin Fire Brigade Pipe Band, and The Savannah Pipe and Drum Corp.”

There was a variety of musical talent present at the parade, “also in the ranks were some of the local high school bands such as the Windsor Forest High School Marching Knights and the Lakewood High school Band.”

Armstrong’s Presence was certainly felt at the 2015 Parade as this year marked the Maiden Voyage of the Armstrong Pirate Ship Float in the parade. The float was revealed to the students of Armstrong in front of the Memorial College Center.

“At the parade it will be decorated with a banner, sails, cannons, and the sides were accented with shamrocks to fit the theme of the parade. We are really excited to show of our new float this year” Asst. Dean of Student Life Cate Steiner said. “We are looking forward to having all of our fellow Pirates come out and support us in the parade and be a part of the parade with us.”