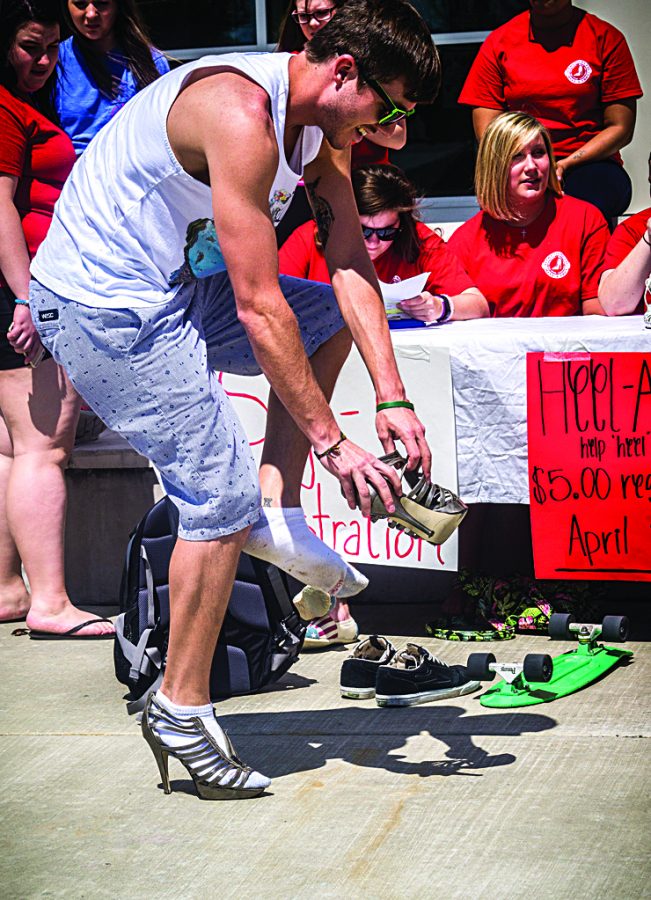 Last week, Armstrong’s sorority Alpha Sigma Tau held their annual “Heel-a-thon” benefit for the children of St. Jude’s Hospital in front of the Student Union, near the fountain. Young men, both students and the public alike, donned high-heeled shoes, navigating an obstacle course to help raise funds for the St. Jude’s Children’s hospital.

For a small registration fee of $5, strictly male participants strapped on the provided high heels and prepared themselves for an intriguing obstacle course. Others could also pay a dollar to pie a “sister” in the face.

The obstacle course’s perimeter included chalk arrows and orange traffic safety cones in order to pave the way. Participants had to around the union, run up the ramp, dance to Beyonce’s “Single Ladies” in front of the union. After strutting their stuff, they had to run back down the stairs, jump rope five times, hopscotch around the fountain, then do the “chicken dance”, and run from the fountain to the finish line.

Sister of AST and senior Rehabilitation Science major Rebecca Carter said, “We had some boys get so into it, they broke the heels.” Boys like Collin Owen.

Collin Owen, a sophomore Business Economics major came out to represent his fraternity Sigma Alpha Epsilon and show some support for the children as well as his friends in the sorority. He had the forethought to do some research beforehand. Laughing, he said, “I actually looked up how to sprint in heels. You’ve got to run on your toes.”

The event has been a tradition for so long that no one was quite sure as to the origin, only a vague mentioning of an older “sister” who had a relative in the care of St. Jude’s and urged the community to help.

St.Jude’s is one of few charities that donates a 100% of the proceeds to the actual cause, not just a percentage or dividend that finds its way into other hands.

Freshman Radiologic Science major and fellow AST Claire Davis, also the event’s coordinator, explained the substance beyond the novel idea of men traipsing around in heels.

“The reason for the heels is a play on words,” she said. “To help ‘heel’ the children.”

Only men were allowed to participate. “If women played too, it wouldn’t be fair.”

Greek life makes up a good portion of student affairs at Armstrong, yet many don’t know the amount of time and effort it takes to organize fundraisers such as Heel-a-thon.

The hardest part in throwing such an event, Davis said, was getting the word out, promoting student and public participation, and breaking boundaries (within the gender-role aspect of hetero-normative men wearing heels).

Despite adversities, Davis and her sorority sister all say they pleased with the turnout. “My favorite part in orchestrating the heel-a-thon was the actual event itself, everyone having a good time, and the guys getting psyched,” Davis said.