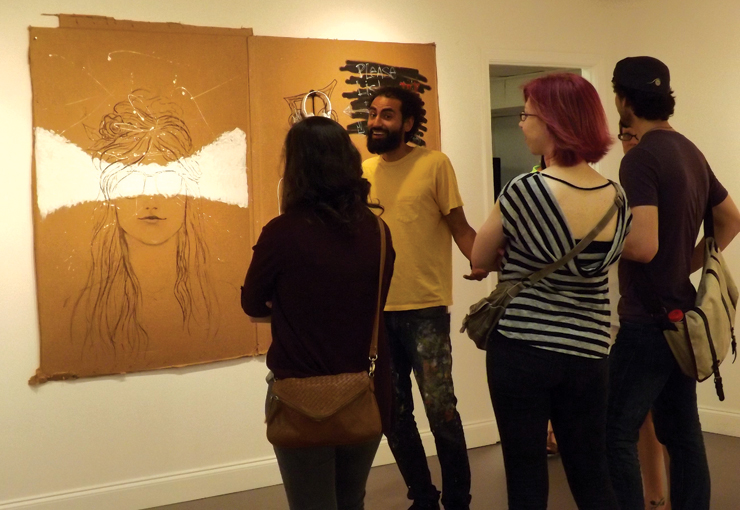 Alchemy: Work from the Founders of Sulfur Studios opened April 4, in the gallery of Sulfur Studios. The three founders – Emily Earl, Alexis Javier, and Jennifer Moss – exhibited some of their work during the Art March.

Although the artists have different styles, their individual work blended into a cohesive whole.

Earl showed a collection of photographs, most of which were from 2013. Her interest in photography began at a young age.

Earl said she changes cameras about every 2 years and that her style changes when she shifts to different cameras. While her work in the gallery was prints made from 35mm color film, she also had a collection of prints from a Polaroid camera in her studio.

She said she took the Polaroids at night when everyone is loose. Those pictures of nightlife in Savannah had a different feel than the pictures in the gallery.

“People respond in a different way [to the Polaroid] because of the look,” Earl said.

Her upcoming goal is to get a new medium format or digital and print on a large scale, roughly 4 feet by 6 feet.

She said a person’s eyes tend to move toward the edges when they see small prints, like 8×10. She hopes the larger format will keep someone’s eyes in the frame so “they will have to stay in the picture.”

Alexis Javier exhibited several mixed media portraits made on cardboard. The pieces reflected his experimentation with wet and dry media, texture, layering and a continuous contour line. He said he wanted to work with cardboard because it’s different from traditional materials like canvas and wood.

He works on multiple projects simultaneously, such as drawing, music and sculpture. He is currently working on music that he calls “sound therapy” as well as a series of painted skateboard decks.

“I don’t let myself get too wrapped up in the same thing. . . I explore different forms of creativity,” Javier said. “We are conduits of creative energy.” He believes artists should stay open to and be aware of their creativity.

He wants to explore the connection between music and visual arts in some of his upcoming projects. Javier would also like to create more interactive exhibits that would focus more on the visitors’ experiences.

Jennifer Moss was inspired by natural forms when she made the work that was featured in the show. For her ‘Emergence’ series, she wanted to use long, loose threads without having to use a loom. Those pieces had black thread sewn into a stiff paper base. The pieces of thread form organic shapes.

She said “the forms repeat themselves” in nature and that she takes those forms and abstracts them. The title for the series came from the fact that the pieces emerged from her sketches and inspiration.

The idea to create Sulfur came as she was using part of the studio space. Moss liked living in Savannah, but was having trouble finding studio space. Her friend allowed her to use part of the building as a studio, but she wanted other artists to also be able to use the space.

Earl, Javier and Moss started Sulfur Studios with an Indiegogo campaign. The studio opened four months ago and rents out studio and gallery space to artists. Sulfur also hosts workshops and community events.

The name Sulfur started out as a joke, but the owners realized that it had a deeper meaning. Sulfur is the 16th element in the Periodic Table and there are 16 spaces (15 studios and the gallery) in the building. Sulfur is also associated with the spirit and soul in alchemical theories.