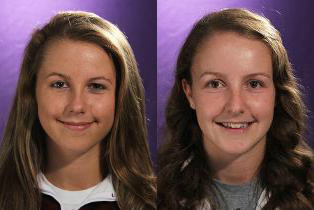 Randi and Parker: the Schroedel sisters.

The Armstrong Pirates’ soccer team has a host of new faces on the field and sidelines this season. With six new freshmen, the Pirates are looking to build around the youth on their team and get back to the NCAA Tournament after a disappointing loss in the first round of last year’s tournament.

One freshman that joined the team this offseason was already pretty familiar Armstrong before she even decided to come to Savannah. Parker Schroedel was comfortable with the team because her older sister, Randi, played for the Pirates as a freshman last season.

The two sisters played together at Pope High School in Marietta, Georgia for three seasons and now they have the opportunity to play together at the next level. Considering that the team already has two sets of twins in Jenny and Michelle Allen, and Ashley and Amanda Green, it will be interesting to see how a third set of sisters changes the team’s dynamic.

Both Randi and Parker believe that they have their own strengths, and the elder of the two thinks she will be able to work well with her younger sister having been able to bring her up through the game and give her a model to follow.

“In a lot of ways, it’s easier because I kinda know how she plays and what she’s going to do,” Randi said. “Then we cover each other really well, again because it’s really easy to anticipate. We are not as sensitive to direction from each other as if somebody else were to [give us orders].”

Parker appreciates what Randi did for her throughout their years of playing little league and high school soccer. She believes that her older sister has given her exactly what she needs to be ready for the next level.

The soccer team is full of different personalities, play-styles, and attitudes. Randi knows that Parker will be able to bring the attitude that head coach Eric Faulconer asks of his players each year.

Being able to have that natural connection with a player is always beneficial for the team. Being sisters, both Parker and Randi know that their connection will surely bring a new dynamic to the Pirate field.

“I think I can help her on the field by just being there for her [in a tight spot],” Parker said. “She knows where I am on the field at all times without looking up. So, her knowing that she has that option on the field, knowing where I am as opposed to some of the other players. It will help me because I haven’t played with any of these other girls besides her. I know how Randi plays and she knows how I play.”

“Randi has the confidence from being here and playing at this level and I’m just getting used to things,” Parker explained. “I’m wanting to try new things and she’s here helping me along the way.”

The girls know, however, that high school and collegiate athletics are very different worlds. They will have to learn to translate their game to the collegiate level.

“In high school, I relied on Randi all the time,” Parker explains. “In high school, the other players were good, I just knew Randi was there. I trusted and knew her. Now, at Armstrong, I know all the players. I’ve seen them play. I can rely on all of them, so it takes pressure off her knowing we are playing together on the field.”

In 2014 the Pirates finished the season 12-5 and advanced to the NCAA Tournament as a four seed, but fell to Wingate in the opening round 1-0. The pair of sisters are looking to be even better this year and hopefully bring a championship home to Savannah.

“I think we are going to be really good,” Randi said excitedly. “We could go so far. Last year, as a team, we were timid because we felt all this pressure to do well. This year, we are more composed and have a more confident outlook- especially in the big games.”

“We are more playing for each other than playing for the title,” Parker said. “That’s how we stay composed.”

“We are a family,” Randi said.

If anyone knows about being a family, it is certainly the Schroedel sisters.