Seniors to step foot in Hanner for the last time Saturday 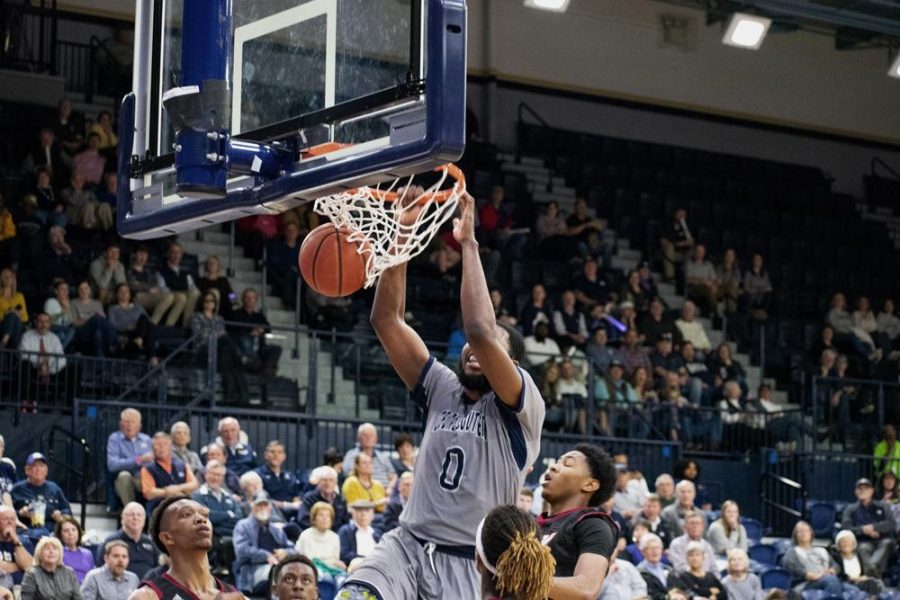 Glenn (0) has seen 2390 minutes on the court as an Eagle, being a huge contributor on the defense as he shows 694 career rebounds.

Senior guard Ike Smith is looking to receive another year of eligibility after playing only 10 games at the beginning of the season. Due to a back injury, he has been forced to sit out the rest of the 2018-19 contests much to the dismay of his teammates and Georgia Southern fans. GS wishes Smith a speedy recovery.

Montae Glenn, a forward from Carrollton, Georgia, has been known as an always consistent big man on the team for years. Standing at a staggering 6’8, Glenn led his alma mater Carrollton High School to the state championship game in 2015. He was named as the 4A Region 5 Player of the Year and the GACA North Georgia Player of the Year his senior season, after finishing with an average PPG of 21 and 13 rebounds.

Here at GS, Glenn has established a more defensive role. Last season, he led the Sun Belt ranked second in the NCAA for offensive rebounds. He reached his season high 18 points in the first match against South Alabama in mid-January. He has been shooting more accurately as of late, with a smooth 64.1 percent statistic from the field.

In addition to being an asset on the court, Glenn is a focused individual in the classroom. As an I.T major, Glenn plans to work in the technology field in the future. Though he wants to pursue a professional basketball career, he knows that the growing world of technology will always need more skilled professionals.

Leaving GS will be a hard transition for him because he has built such close relationships with his teammates.

“I’ve had such a good time with them on and off the court. I’ll just miss hanging out with a lot of the guys,” Glenn said.

Head Coach Mark Byington encouraged Glenn to open up more personally and trust the process as an athlete.

With support from his family and friends, he wants to go into this last regular season game against Georgia State leaving it all on the court.

Tookie Brown, from Madison, Georgia, has broken several GS records in his time here. In addition to grabbing six Sun Belt Player of the Week honors, Brown is the only player in Sun Belt history to surpass 2,000 points and 500 assists.

Brown was the Sun Belt Freshman of the Year, NABC All District in his freshman and sophomore seasons, and was selected for the First Team All-Sun Belt for all three years. He also holds the school record for career free throws. He is averaging almost 18 points and four rebounds a game.

When asked what he’ll miss the most about his soon to be alma mater, Brown responded, “The fans and how we interact as a family. I’m going to miss being around them and seeing everybody everyday.”

Similar to Glenn, Brown was forced to come out of his shell by Byington. He emphasized that he was super shy as a freshman, but now he feels more comfortable speaking in front of others.

Brown credits his sister, fellow athlete Alexis Brown, and his professors for helping him be the best he can be as an Eagle.

You can catch both of these seniors in action for the last time this Saturday against Georgia State at 5 p.m in Hanner Fieldhouse.