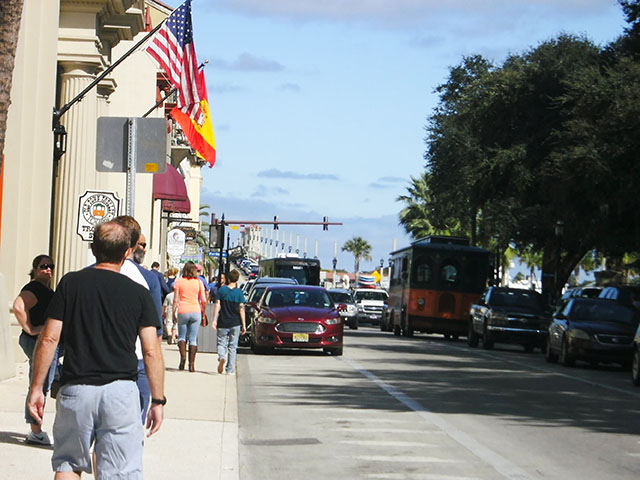 39 Armstrong students ventured to Saint Augustine over the weekend to tour the oldest city in America. As part of Latino Heritage Month, HOLA hosted the trip in partnership with the Recreation and Wellness program.

Historic sites such as the Castillo De San Marcos, a Spanish fort built in 1672, were among the day’s successful adventures. Students were able to see a demonstration of colonists firing real cannons on a pirate ship.

The trip included lunch at Columbia Restaurant, the largest Spanish restaurant in the world and Florida’s oldest eatery. A selection of Spanish meals included Ropa Vieja, which translates to “old clothes.” Students were allowed to spend the rest of the day exploring downtown Saint Augustine.

Michelle Ramos, a History Major and HOLA CLUB member, described Saint Augustine’s historic street as the town’s version of Savannah’s River Street.  She agreed that the experience in Florida was a positive one.

“Well here [in Saint Augustine] there is a lot of bilingual signage and a lot of pride for the Spanish Heritage of the city, so I think it was a great cultural experience. We in Georgia don’t show so much multi-ethnic pride,”  Ramos said.

Jacqueline Campos, a student who took the trip as part of her first year seminar class, recommends it to everyone. “You would have to come back to have a full experience, stay longer than a day, dip into different places,” she said.

Check out the Recreation and Wellness Center for information on more upcoming trips.