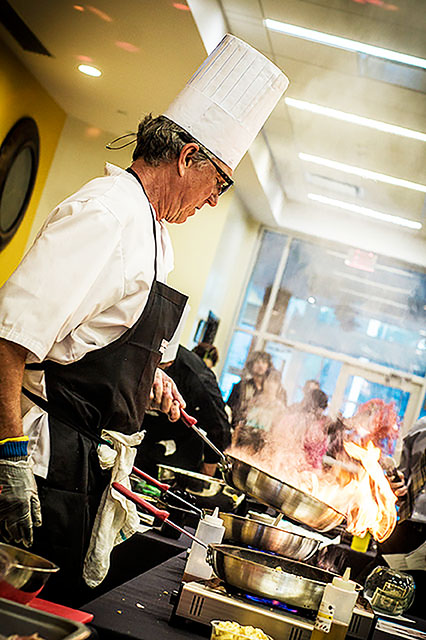 Kolby Harrell, graduate assistant for Multicultural Affairs, was the master of ceremonies for the event.  “ I watched a lot of episodes of Iron Chef, and one of the things I wanted to do was research the secret ingredient so I would have a lot of interesting things to say about avocados,” Harrell said.

The event, taken from the TV show of the same name, featured chefs from around the world who go head to head in a cook-off competition. The two teams were judged on presentation, taste, originality and the ways they incorporated the secret ingredient into their final products.

“[The competition] was intense and I had to improvise toward to the end to finish the dish…it came out just the way I wanted,” chef Greg said.

The opposing team was composed of chef Ed McCafferty and president Bleicken’s husband, Carl Bleicken. The judging panel was made up of five members, one of which was freshman biology major, Chelsea Webster.

“They announced the fifth judge was going to be a student but they would have had to attend the Latin American events this month,” Webster said.  The event was the first time she had tried Latin food.

“I’m a little excited that I was chosen because it’s a really neat experience, I really like Latin and Spaniard Culture,” she said.

Attendees also had the chance to win prizes and vote for the winning team. The event, collaboratively sponsored by Armstrong Dining Services, Multicultural Affairs and Brother to Brother Armstrong, was an interactive and welcoming study break for attending students.