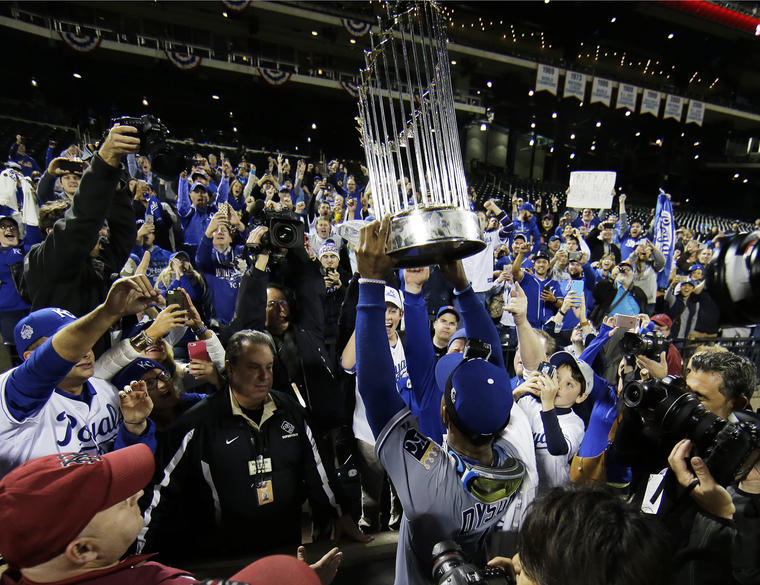 The Kansas City Royals entered this year’s MLB playoffs with vengeance on their minds. The team advanced to their first World Series since 1985 in 2014 but ultimately fell to the San Francisco Giants in seven games.

Just as the fall air was starting to settle in over New York City, the Royals entered the game with a 3-1 series lead and just nine innings between them and their first championship in 30 years. The game went to extra innings, the second time in the series and just the 10th time a World Series has had two games go into extra innings.

When the dust had settled, the Royals had outlasted Matt Harvey and the New York Mets to bring home the trophy. The Royals had their eyes set on the World Series championship since the All-Star break in July as they were one of the hottest teams in baseball after that.

Pitchers Yordano Ventura and Wade Davis were easily their two biggest contributors. Ventura went 9-2 after the break, bringing in an ERA of 3.56 while Davis had a team-best ERA of 1.59.

At the plate, the Royals were electric as Erick Hosmer had a .304 average, driving in 48 RBIs and Mike Moustakas drove in a team-high 15 home runs.

The Royals had a magical run through the playoffs, shutting down the Houston Astros in five games and defeating the Toronto Blue Jays in a classic series in the AL Championship Series.

With the World Series win, the Royals became just the second American League team to win the championship in six years. The last five seasons had been dominated by the St. Louis Cardinals and Giants who split four World Series championships.

Baseball is a tough sport to be dominant in but the Royals showed that they are a team that should be considered a threat from here on out. It is tough to believe that a team that had not made the playoffs since 1985 before last season came and played so well this year but fans will have to accept that fact for the next few months as the Royals bathe in the glory that is the World Series championship.