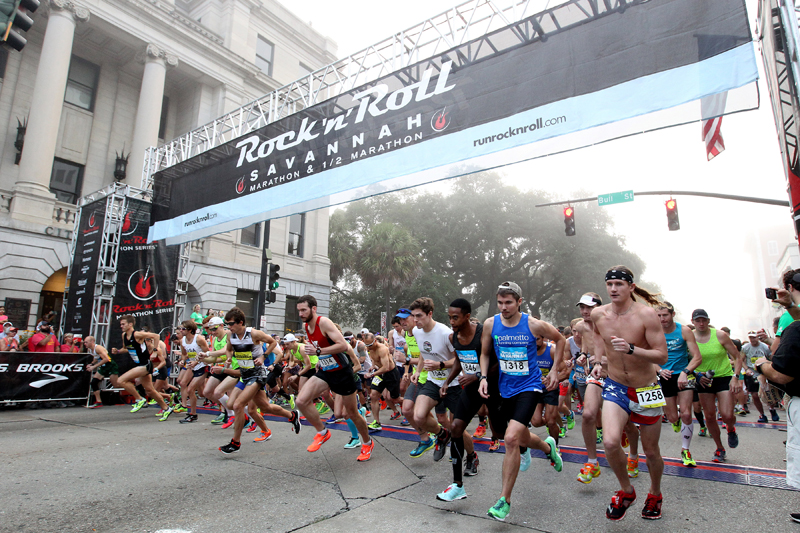 On Saturday, Nov. 7, Armstrong Pirates were on hand at the 8 mile marker handing out Gatorade energy chews and water to runners of this year’s Rock ‘n’ Roll marathon in downtown Savannah. More than thirty volunteers consisting of Armstrong students, staff, and community partners came out to help the university.

Leading those volunteers was Allison Lyon assistant director of Armstrong’s student life. “I think that the volunteers we had today were a tremendous help and truly demonstrated what it means to be a pirate and how important it is to help in our community,” Lyon said.

More than 20,000 runners filled Savannah’s streets over the marathon weekend. The race began at Broughton and Bull streets and finished near Forsyth Park. Participants took part in a variety of races including a full marathon, half marathon, a 13.1 mile relay, a 5K, and a one mile fun run for the kids.

Amongst those runners was Armstrong student Lucy Stone. Saturday’s half marathon was a first for Stone who finished the 13.1 run in just under three hours.

“Seeing so many skilled runners around me was a big motivator and gave me an adrenaline rush,” Stone said.

The Hostess city’s unseasonable heat proved a major obstacle for runners. Several participants passed out during the race due to temperatures and humidity. Marathon officials confirmed in statements that one runner died on Saturday while another passed away Monday, Nov. 9.

“We are saddened by another heartbreaking and tragic loss. Our deepest sympathies and prayers go out to the family members and loved ones of the runner.”

There is no word yet on if the weather was to blame for the individual’s death.

Despite the warmer weather, many runners completed the race. However, just before 10 a.m., marathon officials made the decision to divert runners due to the heat and muggy humidity, shortening the race overall. Reportedly, marathon officials said they would invite those impacted by the weather to other Rock ‘n’ Roll Marathons.

A Savannah police officer is also making headlines globally after he helped an injured runner cross the finish line. Savannah Metro Sergeant John Cain was patrolling near Anderson and Abercorn streets when he noticed runner Robert McCoy fall to the ground. McCoy was only a quarter mile from the finish line.

Cain said that McCoy was determined to finish the half marathon race, so he assisted him in reaching the end. McCoy is recovering from his injuries. He reunited with the sergeant on Monday and offered Cain his medal in appreciation.

Neither the warm weather nor the shorter course stopped patrons from attending the finish line concert starring Rascal Flatts. The popular country music group sang a number of their hit songs for over one thousand spectators in Forsyth Park Saturday afternoon.