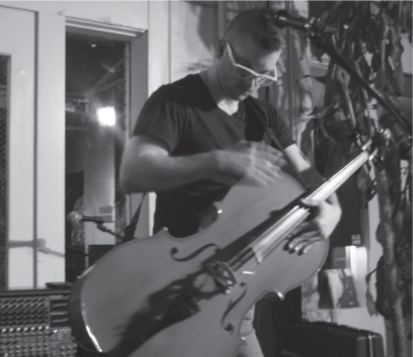 Tokalos is Sarah Clash and Genevieve Chasty. They met in Brooklyn, New York. Both eventually moved to Savannah and they just finished a six-week tour. The name Tokalos has multiple meanings. It is the name of an ancient sea monster, the word used to ask someone to play a song in Spanish and can mean “crazy lady” in Swedish.

Tokalos possesses a relaxed, indie-folk rock sound. Their voices blend together smoothly and the deep, woodsy sound of their guitars mixes well with the breezy whistles and soft percussion in their songs.

The lyrics of their songs were a nice match to their indie sound. “Wash it all away, go right back to start,” was a line from one song. Another had the line “gotta put on my walkin shoes, nothing left to lose.”

The main act, Christopher Bell continued the percussive sounds of the night. He had an electric cello and he alternated between strumming it with a bow and picking the strings with his fingers. Like Tokalos, he played the body of his instrument like a drum on some songs.

He created the effect of a full band by using voice effects, cello effects and a loop system that let him record sound and then play it back. Only a few minutes were required to demonstrate to the audience how each component works together to make a song.

Bell’s music spans a variety of genres including blues, indie rock, pop, funk and folk rock. His range of styles and engagement with the audience generated a vivacious energy in the room. Throughout his performance, Bell told stories as he moved to each song and joked with the audience.

In one story, he joked about constantly being mistaken for a dj before he performs. He said the experience inspired him to learn how to make a remix then proceeded to create a remix for the audience, step by step.

He also incorporated the audience into his performance. For one song he asked the audience to sing the chorus. On the final song, they kept the rhythm going by stomping their feet and clapping.

One of the benefits to seeing live music at local venues like The Sentient Bean, is artist accessibility and how intimate the performance can be. This allows for a connection not just between the audience and artists but between members of the audience as well. At the end of the show, the audience asked for an upbeat encore and Bell played a lively version of “I Want You Back” by the Jackson Five.

Both Tokalos and Christopher Bell have Facebook and bandcamp pages with their music and upcoming shows. The Sentient Bean also has a Facebook page with upcoming events. Check them out for more.