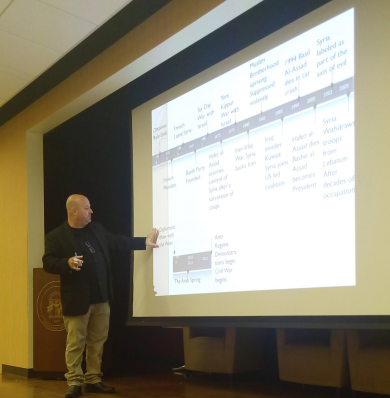 On Friday, Nov. 13, a crowd gathered in the Ogeechee Theater as sociology professor Ned Rinalducci presented “Syria: A n In Depth Look at What’s Going On.”

“Often when we talk about Syria we think ‘It’s politics, it’s war, and it’s not about human suffering’. That’s not the case. Syria is on fire. The Islamic State is not only killing people, but it’s killing culture,” Rinalducci said.

The Islamic State has destroyed key historical and cultural monuments in Syria and ally countries taking in refugees. The Islamic State even claims to be responsible for the recent attacks on the French National Stadium and other Paris locations Friday, Nov. 13.

With these attacks going on in the Middle East and carrying over into Europe, other countries could be taking in even more refugees.

“We’re already seeing a lot of refugees, not just from Syria but from Libya, Iraq, and Yemen. Syria is not the only one in danger,” Rinalducci said.

So how do we go about in putting out the Syrian “fire”?

Rinalducci concluded, “I don’t see anything that could end this anytime soon, other than one side winning but there’s too many sides. It’s not a two sided conflict. It’s a multi-sided conflict that’s complex with so many competing interests that the idea of one side winning is almost unattainable.”