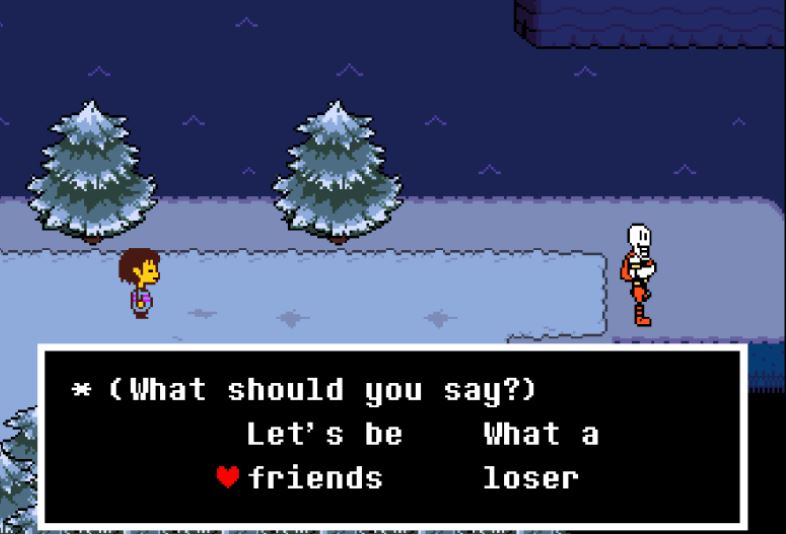 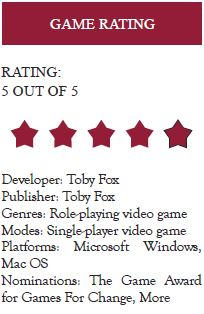 Undertale is a 2D role playing game (RPG) developed and published by Toby Fox, featuring side artwork by Temmie Chang. The game was released for  PC and Mac  Sept. 15 of last year. It has since found a huge following and I can honestly say it deeply touched me to my core, bringing me to tears.

This game is not a fast-paced first person shooter, but rather an original work of
art that combines a wonderful story, complex puzzles and witty dialogue to
create an amazing game. As always, I will try to tell as much as I can without
spoiling.

The lore of the game details the harmonious relationships between Humans and
Monsters until a great war erupted, destroying the peaceful balance between the
two groups and ultimately throwing the world into turmoil. Finally, after many
years, the Humans stood victorious over the Monsters with the greatest
magicians on the planet sealing the Monsters to the Underground with a barrier
between the two worlds.

The story of the game follows an androgynous character that falls into the Underground, giving the player the choice to determine the story path of the character, whether they are good or evil.

The game is turn based, with many characteristics being drawn by “bullet hell games,” a genre which features a massive amount of enemy projectiles. Aside from combat in the game, the player gets a wide variety of puzzles that you must solve in order to advance.

The character is represented in combat as a red heart, which is representative of the player’s soul. You must move around and dodge attacks thrown at you by your opponent. During your turn you have to choose from four options. FIGHT, ACT, ITEM, or the unique part of this game, MERCY.

The game allows the player to follow 3 types of playing styles. The Genocide route requires you to kill everything that crosses your path. The Neutral play style allows you to choose at your leisure which enemies you kill, and those which you chose to show MERCY. The last option is the Pacifist route, this option is as its name
applies, allows you to not kill a single enemy.

The game allots a large amount of time to showing the effects of deciding to kill or spare in the game. All three routes show the player a different side of the story.

I ended up playing all three routes, with a  total of over 20 hours being invested in this game. The characters are rich, the story is beautifully told, and I was more pleased with this 2D game made by a single man, than I have been by AAA games with millions of dollars of funding. I cannot even begin to say how much I recommend this game. This was a game that made me want to immediately replay it upon completion so I could learn more about the story.