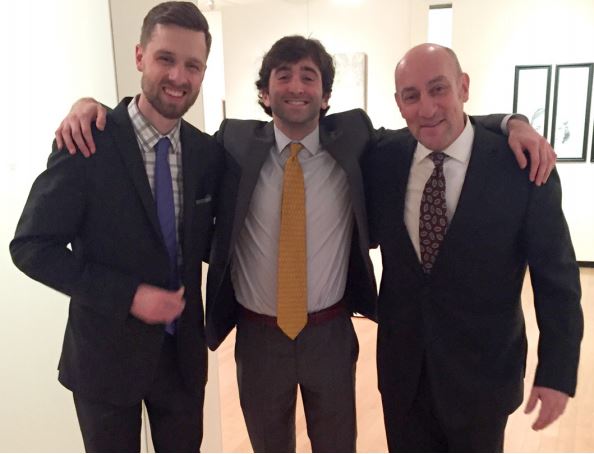 The Piano in the Arts series was started by professor of music and piano, Dr. Benjamin Warsaw, when he came to Armstrong in 2013. “I wanted a program that featured different musicians and types of music [and] that all featured the piano as a form of expression,” Warsaw said.

The series is about piano in its collaborative form. The trio includes Joe Alterman, Justin Chesarek and Scott Glazer who have been playing together as The Joe Alterman Trio for five years. They proved it when they performed in Armstrong’s Fine Arts Auditorium Thursday night, as each instrument complemented the one another in perfect unison.

Alterman plays piano in the trio, while Chesarek plays drums and Glazer opts for an upright bass. Chesarek remembered their first performance together on New Year’s Day of 2011 at the Churchill Grounds Jazz Club in Atlanta.

Their style of music is a mixture of jazz, boogaloo, funk, swing and blues. The feeling behind their music is important to them, wanting the audience to feel the energy and the soul in what they play. “We like soul music,” said Alterman.

The group fluctuates between playing original compositions and covers, but they try to tap into the soul of whatever music they play. Glazer said much of the energy in music comes from the experiences of the musicians. “It’s life that you draw from to do your music,” he said. Glazer is also a music teacher and often gives that advice to his students. He said having a broad background helps a musician find inspiration.

The Joe Alterman Trio’s performance at Armstrong was their Savannah debut. Alterman greeted the audience and introduced the band with a quick“how y’all doin” before setting off into their rendition of Blue Moon, a classic song covered by many artists including Billie Holiday, Ella Fitzgerald and Art Blakey.

It is easy to see the dedication Alterman had to his craft, with his whole body moving as he danced along the keys of the piano—something did throughout the performance. Glazer covered the entire neck of the bass, at one point rolling the song into a bass solo. When Chesarek played his drum solo, his eyes were mostly closed. He appeared to be feeling his way through the solo, tapping into the energy of the song.

The trio pulled off an effortless performance, gliding through their set as Glazer leaned into his bass to play higher notes then rolled back to play lower ones, tilting his head up and down as he moved; how Alterman moved his whole body while playing, including sliding his feet like he was dancing as he sat on the bench; and how Chesarek often played without looking at the drums, feeling the rhythm of each song.

The people in the audience bobbed their heads and tapped their feet during the performance, especially when the group played a funk version of You Are My Sunshine. Alterman invited the audience to get up dance if they felt like it. The audience gave the group a standing ovation and earned an encore song: “I’m Old Fashioned” by Johnny Mercer.

Dr. Warsaw works with students Michelle Kanke and Luke Lyman Barner to plan the series. Future artists include Evelyn Davis, a pianist Warsaw first heard 15 years ago. The next Piano in the Arts Event will be Feb. 18. The event will feature 4 local artists: Jane Ogle, Trae Gurley, Jared Hall and Warsaw performing Crooner songs like Skylark and Good Morning Heartache.