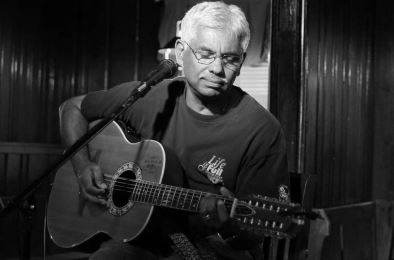 Solo musician Chris Desa will host the First Friday for Folk Music concert this Friday at First Presbyterian Church. He will be joined onstage by the winners of the 2015 Youth Songwriting Competition and the Savannah Ceili Band. All ages are welcome.

Desa,  a member of the Savannah Folk Music Society for 22 years, is also the current president of the Society.  He arranges First Friday concerts when he is not preoccupied with his other career as a maritime consultant.

This First Friday concert promises attendees a special treat: a performance by the victors of the 2015 Youth Songwriting Competition. The four local musicians will perform their winning original pieces, as well as  personal selections of other songs.

The Savannah Ceili Band, a long-tenured Irish quintet, is composed of artists who each play  several instruments in conjunction with vocals. They will conclude the performance with  traditional Irish music.

The First Presbyterian Church hosts the concert series at 7:30 p.m. on the first Friday of each month. A donation is recommended for admission. The proceeds will benefit  the Savannah Folk Music Society’s continuation of the First Friday series as well as  other activities. Event details are available at SavannahFolk.org.