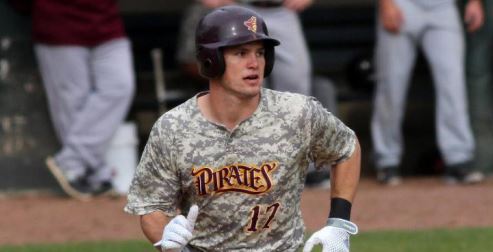 The Pirate baseball team finished off a three-game series with a win in Sunday’s rubber match against the Tusculum Pioneers. Sophomore Chandler Corley drove in two runs in the bottom of the seventh inning to push the Pirates to an 8-7 win and help them to a 2-1 series win after splitting games Saturday.

Jamie Thaggard pitched six strong innings before leaving the game early in the top of the seventh with the bases loaded. Tusculum would rally and make things interesting, tying the game up. Zach Finchum scored two on a shot to left field, Jeremy Glore added an RBI single and Kevin Victoriano finished the seventh inning comeback with a two-run single to left field.

The Pioneers started the top of the ninth with a walk and a hit batsmen getting their first two men on base. Jeremy Glore followed with an RBI single, then a sacrifice fly to deep left field by Nick Lacina got the Pioneers within one. With the tying run on third and two out, junior Caleb Woods got a grounder to second basemen Cody Sherlin to end the game.

Woods (1-0) went on to get the win, pitching 2 1/3 innings giving up two hits and two runs, closing out the game. Devan Watts (0-1) gave up four hits and three runs in five innings pitched, walking three and striking out seven.

Corley had an impressive performance in Sunday’s win, going 2-4 with a homerun and the game-winning RBI in the seventh. Despite being considered the hero, he gave the credit to his teammates, who showed they know how to fight through adversity.

“I was really just impressed with the way we stuck in there and battled with them until the very end,” the sophomore said. “It showed a lot about the kind of team we have this year.”

The Pirates open up their road and Peach Belt Conference schedule when they take on rival USC-Aiken this Friday, Feb. 12 and Saturday, Feb. 13.