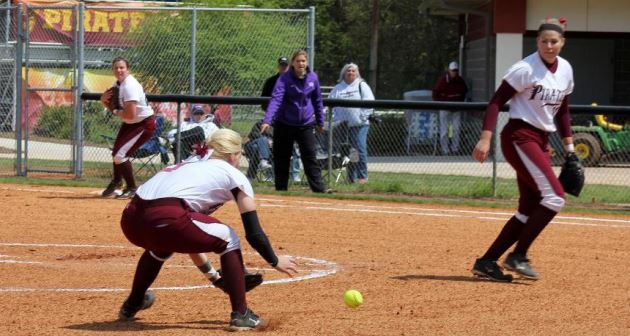 In the first game against the Trojans, both teams remained scoreless through the first five innings. The Trojans made it to the scoreboard first in the top of the sixth on Kelsey Akers’ RBI single which scored Kristen Power making the game 1-0 in favor of Mount Olive.

The Pirate’s retaliated in the bottom of the sixth inning, freshman Macy Coleman cracked a three-run home run and senior Michelle Breen followed with another homer to give the Pirates the definitive 4-1 lead.

In the0 second game, senior Hannah Reppert claimed the scoreboard with a double, a homerun and five RBIs to set the pace for the Pirates’ 10-2 win in five innings win the Royals.

Freshman Morgan Duff claimed the win for the Pirates, giving up five hits and one run in three innings, while walking one and striking out two. Evie Scott took the loss for the Royals, giving up eight hits and six runs, while walking one. Armstrong split their pair of games Sunday, Feb. 21, with a tight loss to Queens, 3-2 and edging out the Trojans, 7-4.

The Pirates took a 1-0 lead in the third inning on senior Ashley Sterritt’s RBI double over Queens. The Royals quickly tied the game back up in the fourth inning on a fielder’s choice RBI by Jasmyn Lindsay.

In the second game Sunday, Reppert crushed a three-run homer and Trzaska delivered another homerun to give the Pirates a lead in the first five innings to secure the 7-4 lead. Bates took the win, walking one and striking out two.

“We played two great teams and really had to work hard to get our wins,” Reppert said. “We just let the first game roll off our back and focused on the game ahead of us and had fun the second game!”

The Pirates moved to 11-5 on the year and will take the field once again Saturday, Feb. 27. They will participate in the Mid-South Classic in Spartanburg, South Carolina.