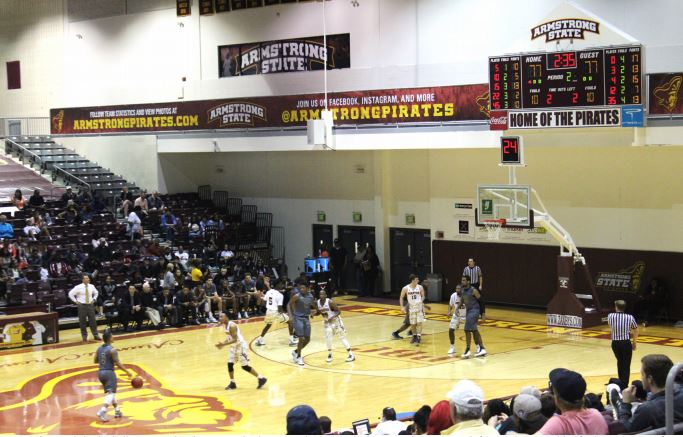 Both sides of the bleachers were filled with positive energy Saturday, Feb 20 at the Armstrong basketball team’s Senior Night. The Pembroke Braves willed their team to win while home attendees cheered on the Pirates.

With such great vibes filling the arena it is no wonder the Pirates won the game 83-80. The Pirates made a huge turn around during the second half of the game. Head coach Evans Davis didn’t expect the win, but was grateful that his team pulled through.

“I envisioned us winning, but I didn’t expect it to be by being 22 down and coming back to win the game,” head coach Evans Davis explained. “Herbert Graham made some very clutch shots down the stretch. Nicholas Scott hit some big threes down the stretch. Marcus Hopper had a big offensive rebound late in the game that was crucial.”

The excitement occurred on the night where seniors are honored in front of a crowd of family, friends and classmates. Hopper, one of the seniors honored, shared what his senior experience has been and how he helps soon to be senior teammates.

“As a senior, this year has been very memorable so far,” he said. “This is my last go round as a college athlete and I’m cherishing every moment. Being a senior on this team, I try to help my teammates out in any way possible. I’ve been in college five years now so I’ve been around the block. When we have those tough days when things aren’t looking so well, I just keep the positivity and tell my teammates to keep pushing because tomorrow isn’t promised.”

Coach Davis has also learned a thing or two from the senior athletes.

“I have learned how to be patient. It’s a group of guys, so at times, they really test my patience. There are always better ways to communicate. So, they taught me how to patient and several ways to communicate with them,” Davis said.

Hopper is also focused on his future in basketball, with dreams of playing professionally and even coaching.

“I love this game of basketball, I never knew I was going to be playing college basketball because I used to weigh 312 pounds but I have been blessed with the coaches who have worked with me to get where I’m at today,” Hopper said. “I want to play professional basketball overseas but if I do not get that opportunity, I want to be a coach and help kids out the same way I was.”

The Pirates moved to 11-14 overall and 9-9 in the Peach Belt with the upset win over the Braves. They wrapped up their regular season with a home game against Flagler Wednesday.