Polls: Sanders ‘political revolution’ to douse off in Ga. 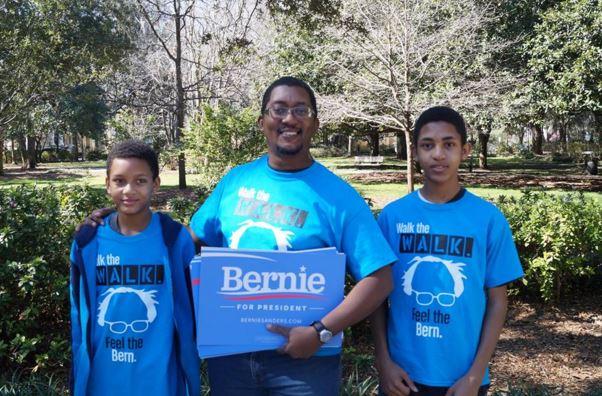 But in Nevada, the Millennial vote couldn’t balance off a more diverse population and an older electorate that was not only the majority, but more loyal to Clinton than in Iowa and New Hampshire

According to CNN, black voters in Nevada made up 13 percent of the Democratic voting bloc, trailing Latino voters who polled five points higher.

But unlike Latino voters, the black electorate favored the former Secretary of State by 54 points, a landslide margin compared to Sanders eight point lead among the 18 percent of Latino voters in the Silver State.

And what happened in Vegas will most likely not stay in Vegas.

In Georgia, 51 percent of the 2008 Democratic primary voters were black. Black voters over 44 made up a quarter of the total electorate, while black voters ages 18 to 44 came ahead at 26 percent, an area where Sanders could benefit come Super Tuesday.

Yet, for Sanders to balance out Clinton’s popularity in Georgia, he will also have to do well among voters over 44 who made up 53 percent of the Georgia Democratic base in 2008.

A poll by Landmark/Rosetta Stone shows Clinton leading by 52 points and winning overwhelmingly across race, age and gender demographics.

A poll by Public Policy Polling shows Clinton leading among black voters by 56 points and 34 points among the general electorate.

But despite these numbers, the Democratic Party of Georgia will not forecast a thunderstorm for Sanders, or a landslide for Clinton.

“No one knows what’s going to happen when voters show up to the polls,” Michael Smith, communications director at the Democratic Party of Georgia, told the Inkwell.

However, the Democratic party is willing to predict “a surge in voter turnout,” Smith said, which could either mitigate a terrible Sanders defeat, or drastically douse the senator’s support by a much wider margin, if recent polls prove correct.

And if the poll-lagging Democratic-socialist hopes for a silver lining, he will have to rely on a Georgia campaign that kicked off in early February, when the senator inaugurated campaign offices in Athens, Atlanta and Savannah, just a month before the ‘SEC primaries.’

But in Savannah, Sanders’ grassroots support had developed long before the candidate’s campaign offices came into existence. Last November, the Vermont senator found an audience large enough to pack the Johnny Mercer Theater with approximately 2,500 people, according to the Savannah Morning News.

From this base of supporters came Danielle Renée, who volunteered as a Sanders grassroots organizer in the area before being tapped by the Sanders campaign to serve as a field organizer in the city.

Renée says her team has focused on early voting and phone banking while canvassing across Savannah, targeting areas for potential delegates and undecided voters.

The African-American electorate isn’t really opposed to Sanders, she said.

They simply haven’t heard of him.

“When we do speak to black voters they don’t really know a lot about Bernie Sanders,” Renée said. “But when we speak to them about his civil rights record, and his plan for police reform and end racial profiling, they are wonderfully surprised and say they would actually consider him in voting.”

But if Sanders isn’t able to win over older black voters or poll high among voters over 44, there could be room for progress among first-time and young black voters.

“We did a voter registration drive at Armstrong to make sure people were registered to vote and to make sure they knew where they were going to vote based on their precincts.” Renée said.

“We told them about early voting and we continuously put this information out on social media via Facebook, Instagram and Twitter, to make sure Millennials get out to vote,” she added. “Their vote and voice is extremely important.”

This could give an opportunity for young voters to weigh in numerically.

Miguel Lo, an Armstrong student who describes himself as a mix of Caribbean, Chinese and African-American descent, says he will pick Sanders come Tuesday based on the senator’s plan to make public college education free along several other issues.

He says young voters should follow suit and help sway the polls in favor of Sanders.

“Bernie Sanders’ philosophy isn’t radical,” Lo said. “There’s just an association with minorities voters and the Clinton legacy … we have to make sure young people get out to vote and change that.”

But according to Chris Tecklenburg, assistant professor of political science at Armstrong, that change won’t come easy.

“I wouldn’t be surprised if even the younger African-American voters go for Clinton because I think that a lot of her policies line up with Obama’s, or at least give the perception to,” he said. “When you have Hillary linked to the Obama administration it gets very difficult for Bernie Sanders to catch up.”

On Saturday, Sanders grassroots supporters gathered at Forsyth park to rally in favor of their presidential candidate. Around 50 people showed up.

The Sanders’ Savannah campaign will continue to canvass voters in the area and will provide rides to the polls Tuesday, after which, Georgia and 12 others states will show if the primary results in South Carolina Saturday night have gained traction among black voters.

The Palmetto State will lead the Democratic conversation in the South.

“South Carolina is a baseline for Georgia” Tecklenburg added.