SGA candidates: Know them before you vote them 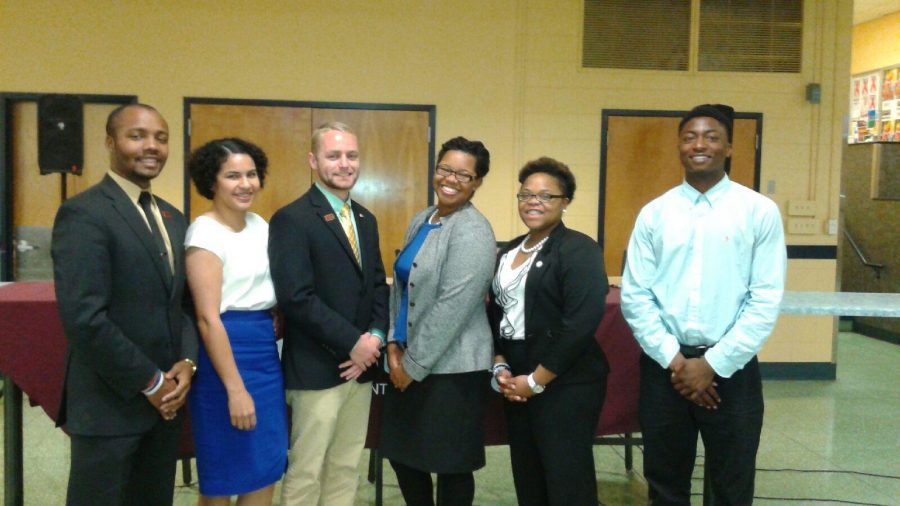 Candidates for the 2016-2017 Student Government Association executive board debated March 9 and 10 before spring break. Online elections are now open and will close this Thursday, March 31 at 11:59 p.m.
VOTE HERE.
Current SGA President Matthias Downs and SGA Public Relations officer Zachary Armstrong moderated the President and Vice President debates March 10, asking candidates about their experiences and plans for the positions.

Stewart has served as the SGA Attorney General this year and has been a member of the Campus Union Board for two years. He is also the treasurer of Sigma Alpha Epsilon Fraternity at Armstrong, vice president of Intra Fraternity Council, and a member of the master planning committee.

Medouze is a recipient of the Outstanding Student Leadership award, serving as both the president of NAACP and treasurer of Zeta Phi Beta Sorority. She is also involved in Circle K and Feminists United.

Harris has served as an SGA senator and was on the Campus and Community Initiative Committee.

One responsibility of the SGA President is communicating with the student body and Registered Student Organizations. Each candidate explained how they plan on doing so.

He also discussed his ideas of “dorm stomping,” which involves distributing the student activity calendars in the residential areas. Stewart would also like to utilize Facebook and student emails to keep everyone informed.

Medouze discussed first talking to students and finding out what they want, then making events that appeal to the traditional college student. She would also like to implement a networking mixer where different student organizations can meet and discuss future events.

Harris addressed that awareness is key to getting people involved. He’d consider what people want to do and communicate with people on campus.

The candidates went on to discuss topics they would like to focus on.

Stewart will focus on campus safety by engaging with the campus police department. He addressed concerns such as lighting on campus and the need for more security cameras.
Medouze would like to focus on diversity and collaborations.

“Even though we have the office of multicultural affairs, there are still aspects of campus life that are not addressed,” she explained.

Harris would like to make student involvement a priority. “I would focus on making sure every student is involved and connected to campus as a whole,” he said.

Morales served on the SGA rules committee for two years at the Armstrong Liberty Center where she also wrote bylaws for student council. If elected, she would like to focus on providing more military friendly classes in the afternoon.

Multon is the secretary of Zeta Phi Beta Sorority and is a member of NAACP. She plans on making community service a priority if elected; increasing student involvement in the community and hosting donation drives such as a Thanksgiving turkey collection.

“I may not have experience in SGA, but I am able to learn about policies and learn about the position.” Multon said.

The secretary and treasurer candidates debated on March 9, answering questions from the floor confidently. Miguel Arroyo moderated their debate where three out of four candidates represented various Greek organizations at Armstrong.

“I was afraid because I wasn’t a part of SGA, never knew about it. I really wasn’t a part of any organization because came out of high school and focused on my grades. This year I thought it was an opportunity to put myself out there and help the community.” Reeves said of her incentive to run for office.

Fopiano has been serving as a senator with the Student Government Association for a year and pointed out that her involvement with a variety of student organizations will help her bring the campus community together.

Both secretary candidates emphasized that making SGA visible on campus and reaching out to various groups is on their agendas. Reeves plans to focus on building up the SGA app and making SGA more visible on social media while Fopiano is ready to connect clubs and organizations with each other.

Next, the candidates for treasurer took their seats at the table. Emmanuel Diaz, junior physics major, president of HOLA and member of the RSO funding board faced off against U.S army veteran Laura Glen who is a certified tax preparer and has served as treasurer of a military family readiness group.

The treasurer debate saw back and forth questioning from the floor regarding the distribution of funds to student organizations and the transparency of money handled by SGA. Candidates also answered questions from the moderator regarding issues on campus with finances and offered their solutions.

Glen proposed monthly town hall meetings to educate and update students on where the money from SGA is going while Diaz would like to see more members on the committee board.

Students can vote now until Thursday at 11:59 p.m. by clicking the link in the article, or though the email from th SGA committee.
VOTE HERE