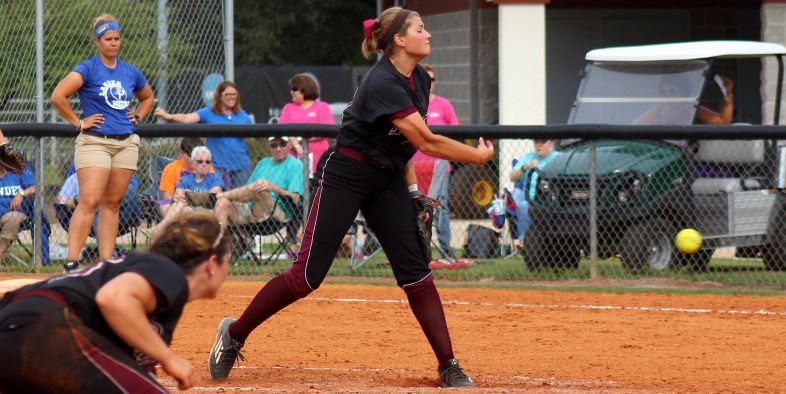 The Armstrong State University softball team defeated visiting Peach Belt Conference opponent Lander University in a pair of shutouts on Saturday, March 27. This gave them a doubleheader sweep over the rival Bearcats and it was a dominant showing from the beginning.

In Game 1, the Pirates started off with a run on an RBI single from freshman Logan Harrell in the bottom of the first. Then in the fifth, junior Hannah Reppert and freshman Macy Coleman got a pair of two-run home runs to push the score to a definitive 5-0 victory. Junior Tori Bates took the win for the Pirates, earning her first shutout of the season.

Lander’s Lexi Griffin took the loss, giving up eight hits and five runs. In Game 2, the Pirates took the lead 2-0 off of senior Michelle Breen’s solo home run in the fourth and senior Peyton Roth’s sacrifice RBI the fifth. The Bearcats had back-to-back hits in the seventh inning, putting their tying runs on base with only one out.

However, junior pitcher Jane Trzaska for the Pirates got Lander’s Casey Kent to line out into a double play to end the game at 2-0. Trzaska took the win for the Pirates, also earning her first shutout of the season. Lander’s McKenzi Ferguson took the loss, giving up four hits and two runs.

“The defense was playing really well,” Trzaska explained about the big win. “They made some really key plays, especially the double play to end the game. It definitely helps when there is solid defense to stay loose while pitching.”

After a doubleheader sweep over Flagler on Wednesday, March 23, the Pirates have now won eight straight games. They sit at a record of 24-8 and 8-2 in the conference. They play two road doubleheaders against Young Harris on Saturday, April 2 and Montevallo Sunday, April 3.

They then return home to make up a doubleheader that got rained out Friday, March 25 against USC Aiken on Wednesday, April 6