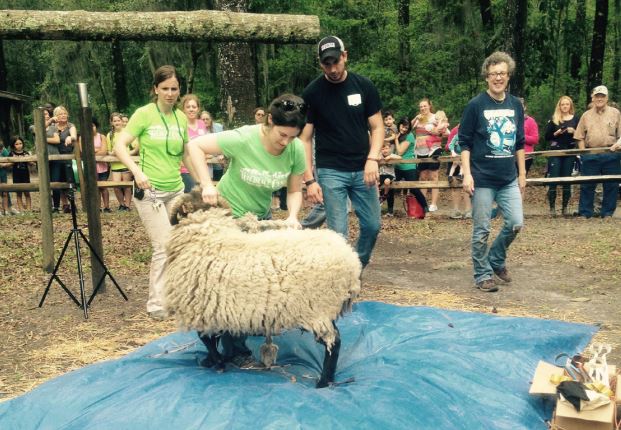 Savannah’s Oatland Island Wildlife center is well-known for its myriad exhibits featuring animals from all over Georgia. Goats, pigs and cows dot the center’s compound in addition to predators like cougars, bobcats and wolves. Despite the vast selection of animals, Saturday’s events were all about sheep.

Sheep are coveted for their thick, fuzzy wool, a raw material used in many weaving processes to create wool. A sheep’s wool grows at a rapid rate, as one sheep can produce almost as much as 30 pounds per year.

As such, sheep must be cut or “shorn,” a tedious task that must be performed at least once a year. Special Events Coordinator Annie Quinting has turned the rather routine task of mindless shearing into an informative, fun event aimed at teaching attendants all about the shearing and post-shearing process.

The real attraction, what everyone was there for, was the sheep shearing itself. A dingy, sheep was led into the middle of the clearing where it was surrounded by a team of five. They promptly grabbed the animal by its horns and legs, facing little resistance as it struggled for a moment, then lay on the ground, subdued. The team quickly went to work, carefully focusing on not nicking or cutting the sheep’s skin as they removed the fleece.

After 30 minutes of hard work, the group stood back from the sheep with one long, intact fleece. The sheep begrudgingly rose to its feet, not seeming to notice the new resplendent white coat it now bore, and was led away.

“I think this event has been going on ever since Oatland has had the barnyard with sheep!” Quinting said.

She has been in charge of the festival for the past 10 years. She explains that the festival has not changed much over the years, save for the addition of Coastal Empire Beekeepers Association in attendance.

Quinting, a member of the Fiber Guild of Savannah and a self-proclaimed fiber arts enthusiast, was enthusiastic about the Guild’s presence, saying that members “do demonstrations of carding (which visitors can also participate in), dying, spinning, weaving and other fiber related arts.”

In addition to the Fiber Guild’s presentation, the festival also featured rope making, traditional tool demonstrations and hay rides to and from the Heritage Home Site. Homey country music was provided by artists Joe Nelson and James Pitman.

While the Sheep Shearing Festival stays the same as the years go on, Quinting expressed the Center’s continual need for volunteers.

“We are a small staff with a lot to take care of so we are always in need. We would love to have more college student involvement.”