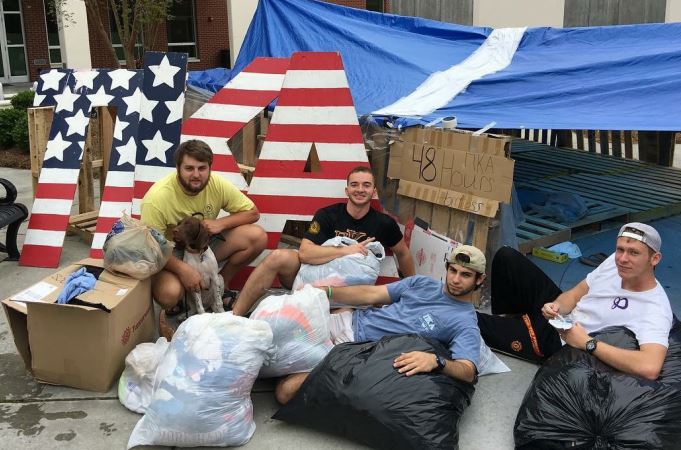 Brothers of the Pi Kappa Alpha fraternity pose with some donations at their homeless camp outside the student union. (Photo courtesy of Julius Rodillas )

Members of Pi Kappa Alpha (PIKE) lived in unfavorable conditions for 48 hours this weekend to raise awareness and donate to the homeless community in Savannah.

The fraternity received dozens of donations from students, staff and other organizations which were then given to Old Savannah City Mission at the event’s end.

“To raise awareness you need to do something,” said Matthew Seay, a member who was taking part in his first 48 hours homeless event with PIKE. “It’s a very humbling experience for us,” he added.

Several members slept homeless outside the student union over the weekend, fighting rainstorms and high winds. Wooden pallets were used for beds along with plastic tarp for roofing. Throughout the weekend, the brothers bonded, maintained their homeless shelter and educated donors and passersby on the cause.

Donations included canned goods, clothing and some shoes, all of which will help the homeless population in the city.

According to the city of Savannah’s website, there are approximately 20 homeless camps in the city and the Homeless Authority estimates that Savannah is short of affordable housing for the general population by about 8,000 units.

The website also highlights that “the larger homeless population, which includes people who are in and out of homelessness and people who are temporarily without a home, is estimated to be about 4,000.”

The fraternity’s fundraising event is in its sixth year and is currently the only event of its kind at Armstrong. Any food the members eat during the event is donated by other student organizations, such as sororities and other donors.

All donations collected by PIKE will be distributed to the homeless via Old Savannah City Mission. For more information on how you can get involved, visit ocsm.org.