Instances of blackface found in Georgia Southern yearbooks from the 1960s 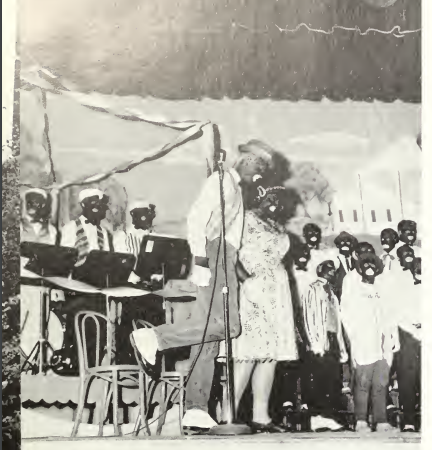 A 'mistril show' performance captured in a 1963 Reflector yearbook. The people as well as the picture's photographer are not captioned.

Four instances of culturally inappropriate photographs have been found in Georgia Southern University’s 1963 and 1964 yearbooks.

Upon review of Reflector yearbooks from 1954 to 1989, The George-Anne found several instances of cultural appropriation and two instances of blackface.

The two blackface images were captioned as part of a minstrel show, an American form of entertainment skits developed in the early 19th century that depicted racial stereotypes of African Americans portrayed by white actors in makeup.

Another image of concern was of a group of people dressed as ghouls for the 1986 Haunted Forest event. One member’s face is covered in black paint.

Although this picture does not depict blackface, another past photo of interest depicts Kappa Alpha fraternity members posing with a rebel flag.

Director of Marketing and Communications Jennifer Wise sent a response on behalf of the university.

“These offensive images do not reflect Georgia Southern University’s values or our ongoing efforts to create an environment where differences are welcomed, various perspectives are respectfully heard and every individual feels a sense of belonging,” Wise said.

These yearbooks have been archived and are available for public viewing here.

The following people contributed to this article by looking through GS year books: