OP/Ed: Are we really a dry campus? 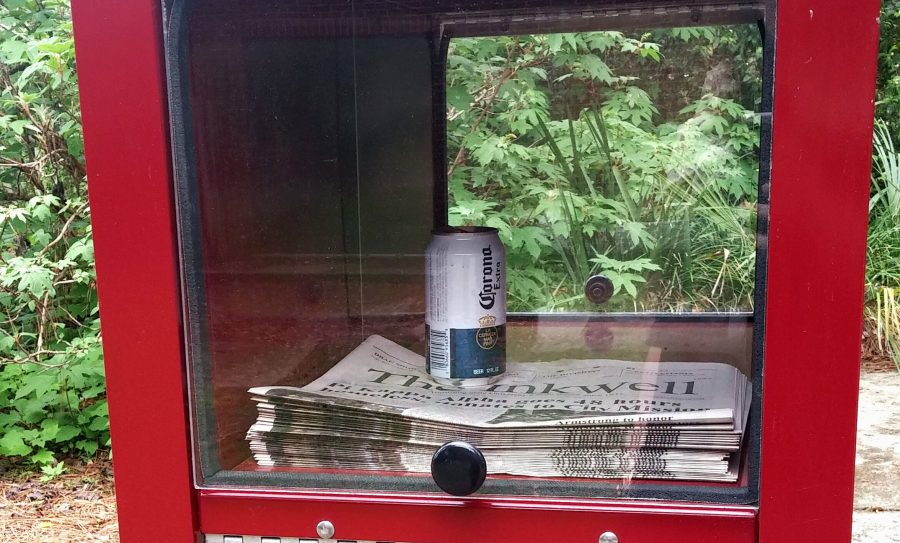 I was taking my routine walk around Gamble Hall recently when I passed one of the big, red Inkwell stands. As I got closer, I realized there was a soda can inside, sitting on top of our latest issue. Since I work for both Gamble Hall and the Inkwell, this litter was a pretty annoying sight.

Imagine my surprise when I got close enough to realize that it was actually a nearly-empty, still-cool can of Corona Extra. That’s right. Beer. Una Cerveza. Did I mention it was in my newsstand and could have ruined 40 fresh newspapers?

Now folks, I didn’t think much about this at first, aside from being annoyed, and at how I looked to passersby with beer in my hand as I closed the short distance to the trashcan. I also considered how alarming it was that I found it right on the path to the commuter parking lot where its owner probably got behind the wheel and drove away. The most ironic part though? Armstrong is a “dry campus.”

What is a “dry campus” you ask? It didn’t sway me one way or the other as an 18 year old deciding to enroll here, but on those websites that let you compare universities by dishing out all the stats, it is clearly stated that “Armstrong is a dry campus, which means alcohol is banned and absolutely none is allowed.” A student contributor even sites hefty fines upon being caught with a wine cooler in his fridge during an inspection.

So forget the beer can. This notion of us being a “dry campus” isn’t actually correct. Though “dry campus” implies we’re not allowed to knock back a cold one alone in our room as we cram for finals (spoiler alert, we can’t all get shitfaced all the time), this isn’t actually the case.

Did you know that since last Fall, Greek life has been allowed to have alcohol at their on-campus events by simply checking a box on a form? Or that we have had an entire residential community on campus (of students 21+ of course) who have no alcohol restrictions?

If a Greek Organization opts to host an event with alcohol, all they have to do is fill in “a risk management plan” further along on the form for legal reasons and to appease their national higher-ups. The regular RSO form is nearly identical except for the presence of anything involving alcohol. Could other organizations not do that?

Why Greeks and not other RSOs? Do they pay for the right to booze in their dues? Do they buy the right? While I’m friends with some Greeks, I’m not going to pretend like their organizations don’t have a bad rep. Are they as a whole really, really, thought of as a more responsible bunch than other casual student organizations like Go Green, Anthropology Club, French Club, Math Club, Feminists United, etc…? I’m not really going out on a limb here.

Not being labeled a dry campus would not change the law that persons under 21 can’t consume alcohol. Armstrong’s own website says that “students and visitors are not permitted to have alcohol beverages in Housing and Residence Life properties or anywhere on the campus property.”

So are we a dry campus? I guess so (*shifty eyes*). Except for all the Greeks. And everyone in the two buildings that make up the Finish Strong community… but yes, alcohol is most certainly banned.

So… Which is it, Armstrong? Should I be annoyed with beer cans in my newsstand, or come to expect them?