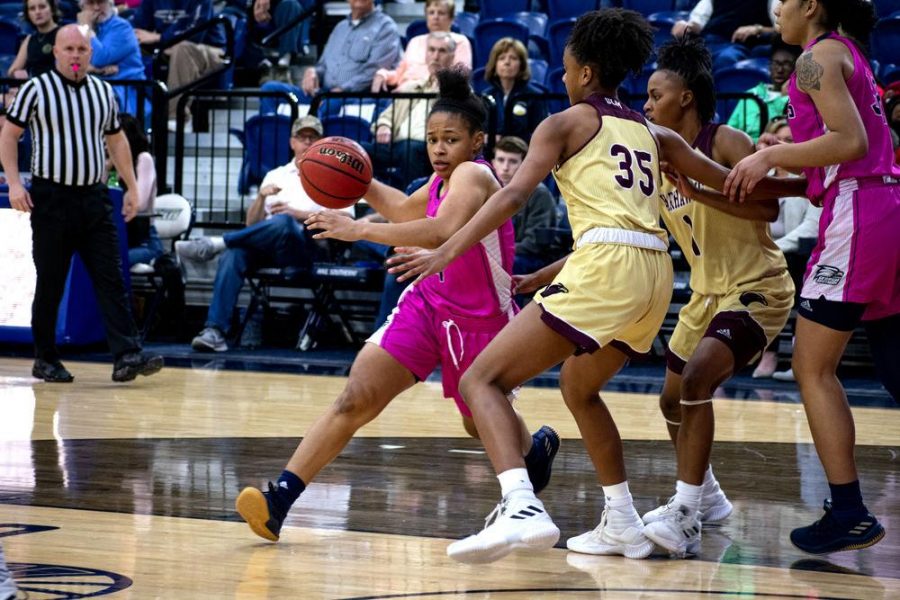 Junior guard Alexis Brown (4) has been a leader for the Eagles this season, scoring 52 total points in her 753 total minutes of play.

Georgia Southern women’s basketball is set to take on Troy in the Sun Belt match-up at Trojan Arena at 3 p.m. on Saturday in Troy, Alabama.

With the Eagles being ranked last in the Sun Belt, this weekend they will have to head into the game extremely focused. After meeting the University of South Alabama this Thursday, the Eagles will then travel to meet the trojans to end their trip to Alabama.

The last time the Eagles met the Trojans, the Eagles were very successful, especially with junior guard Alexis Brown had a career-high with 34 points and 10 rebounds in the game.

There are a few players to watch out for in this weekend’s match-up. Kayla Robinson, a junior guard, scored 16 points and played for 22 minutes in her last game. In the same game, Amber Rivers, a junior forward from Birmingham, Alabama, had seven rebounds.

On the Eagles side of the court, Brown is a player that fans have watched for weeks. In her game against the University of Louisiana at Monroe, she scored 14 points and played 38 minutes of the game.

Brown had two steals while junior guard Amira Atwater had three on the game. Atwater also an aide in the Eagles scoring as many points as they did, playing 36 whole minutes in the game.

The Eagles will have to really focus on concentration and communication since these are the places that they have vocalized that they struggle.

The Eagles will meet the Trojans Saturday at 3 p.m., which will be live on ESPN+.