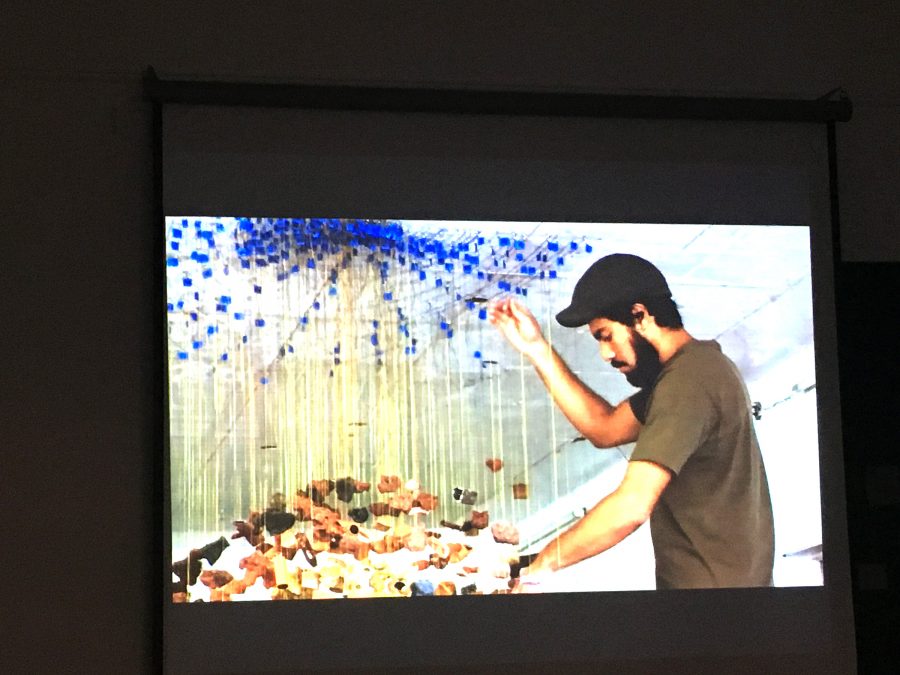 This past Saturday and Sunday, local Savannah nonprofit Art Rise held an exhibition at the Non-Fiction Gallery featuring several screenings of documentaries through Art 21 and PBS.

One of only two venues permitted to screen the films, Non-fiction Gallery spread the film event over two days. Art 21 featured documentaries on artists from Los Angeles, Chicago, Vancouver, and Mexico City.

The exhibition featured a plethora of various artists, from a vintage typewriter on a desk decoupaged with the pages from a French novel, to surreal pieces and multimedia collages framed in ornate, baroque style.

Classical music and old jazz played intermittently while the audience waited for the films to begin.

During the Saturday showing of Los Angeles and Chicago, an Art Rise facilitator Julie Miller, explained that they had just received rights to film the documentaries. She said of the previous night’s films that “a lot of artists of color talked about being a person of color in America, and how it influences their art.”

The episodes themselves focus on individual artists for a brief 15 to 20 minutes, “leaving you wanting more,” Miller said.

Sunday’s event featured the screenings from both Vancouver and Mexico City.  Within art in the twenty-first century, the first resident Mexico City artist covered was Damian Ortega. The film opens on his large-scale installation works involving everyday household objects, furniture like chairs and tables, cardboard boxes, newspapers and small remnants from their Day of the Dead festival, even bagels and bread.

Concerning art, he looks to the camera, smiles, and says, “If you don’t do it, no one else will.”

One of his most dominant pieces, includes a large installation work in Mexico City titled “Domestic Cosmogony” involving various furniture and shining pots and pans set in circles reminiscent of planetary orbit.

Ortega is a self-taught artist, with just a few mentors. As the camera panned across his vast library, he explained that his influences are theology, psychology, biology, feminism and how each section becomes an idea for a new series. He said his art has moved from mere representation to presentation. He continues living and working in Mexico City and has no desire to leave.

Next was Mexico City artist Minerva Cuerva. Her work has been both installation-based and conceptual while remaining rooted in social justice, political crisis’ involving resistance and dissidence.

As a visual artist, she did not intend to start working with political affairs, it “just became obvious.” In one of her conceptual works, “Mejor Vida Corp” (“Better Life Co.” translated) she created “symbolic actions giving away little gifts, like a subway ticket, a student identification card…which created a sense of freedom that actions are possible and you can empower people.”

From her perspective, when you live under an oppressive government, street intervention seems to be the most powerful way to express oneself, especially through art and conceptual works, like Cuerva’s herself.

Her idea was a social one reflective of the guarded nature of Mexico City citizens and in her work she hopes to make things visible again.

The last artist in the documentary is Natalia Almada. She graduated from Rhode Island’s School of Design and only took an elective of video before deciding to make her life dedicated to film. She also edits all of her own films which creates a “nice reflective space.” In the first part of her portion of the documentary, she discusses her master’s thesis about the death of her sister by drowning.

She interweaves voice-overs of her mother re-telling the tale of the accident, overlaid with various bodies of water. One can recall her speaking about the eerie but universal sound of a mother’s scream once they have outlived a child.

One scene depicts a community pool, with water lapping against the side, while a caption explains the “air of impotence” one feels.

After PBS has aired the series for a certain amount of time, the episodes will be free and available on their website.

Art Rise and the Non-Fiction Gallery hope to have more events like this in the future, including limiting the evenings to one documentary screening and adding a discussion panel.

Non-Fiction Gallery is located at 1522 Bull St, and Art Rises is located in the Starland District within Desoto Row.