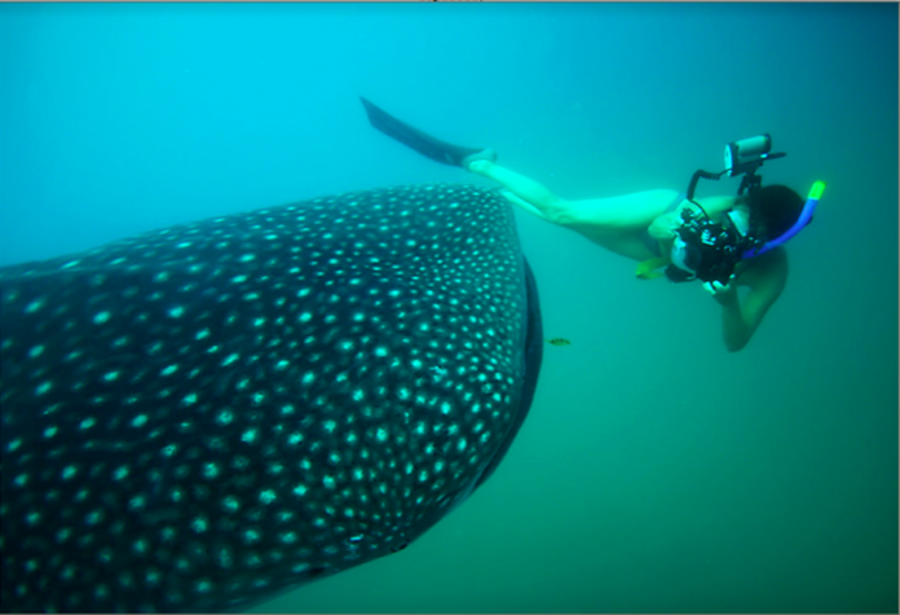 How did you get into underwater photography?

I have always been passionate about water and being immersed in it. I feel safe and happy in water. It is my ‘ go to’ place if I am ever stressed. As a child, I spent many holidays in the blue, warm Indian Ocean around  Mombasa. My parents say I could swim before I could walk. I definitely preferred being in water from a very young age. I started photography as a hobby around 14 years ago, then in April 2007 I decided that I needed a career change. I was a litigation attorney with my own practice in Johannesburg at the time. I sold the files in my firm and decided instead to follow my passion for photography. Some may call this a ‘mid-life crisis’.

Much of your photography features marine life. What draws you to this type of photography?

I have a strong drive to pursue the process of (and the ‘art’ around) interacting with animals. This means both my own interactions with animals and also those of other people as they interact with animals. These would also include both the positive and negative aspects of interacting.  I have always been fascinated with animals, particularly those of the unknown and mysterious oceans. Oceans are magical and powerful ‘dreamlike’ places where thousands of opportunities exist to interact with and capture beauty with a camera. I try to show people what many of them may otherwise never see – the underwater world.

What makes South Africa a good base for photographers?

South Africa has such a huge and incredible coastline with a wealth of diverse creatures and activities.

I’m a big fan of both your marine and terrestrial animal photography. Is it harder to capture an animal on land, or in the water?

I may be ‘shot at dawn’ (and not with a camera) for this statement amongst my landlubber colleagues. I believe that everything is more challenging underwater than on land. I could go on for ages but let me name a few: cameras don’t like water, especially salty water; there are some serious currents in the oceans; wild sea animals can’t be fenced in or kept away from you by bars; the waves and visibility can be extremely challenging sometimes. There are so many more but in fact, I am drawn to the challenge of underwater photography and I am sure many of my colleagues who prefer working in water will say the same thing.

You recently traveled to India to photograph snow leopards. This seems very different from your other photography… what drove the decision?

One of my biggest challenges is knowing where my working life ends and where my relaxation time begins. Sometimes I feel the need to say, on this trip I am not working and I am just going to relax and enjoy it. I have spent many years in the oceans and shooting wildlife beneath the waves so I simply needed a change. I have a soft spot for cats and an opportunity arose to visit the Himalayas. I could not resist the adventure and photo opportunity.  Sometimes being a professional photographer draws you away from your creativity and on occasion it is important to do something just for yourself where there is no pressure to sell or succeed. I find that doing this keeps the creative juices flowing.

It’s quite difficult to get into photography as a profession. Do you have any advice for budding photographers?

I was financially independent before I became a professional photographer.  If you are studying something other than photography, then I recommend that you stay on that path for a few years whilst pursuing your photography as a serious hobby. Prepare a business plan together with someone who knows how, then work out what your requirements are and whether there is a niche for you. In particular women tend to be popular as wedding and fashion photographers and there’s money in both of those, so that’s a good start if you are interested in that field.

What challenges can photographers expect?

Photography is a difficult career for many reasons but two of the main ones for me have been:

The huge changes in the medium of photography over the past five years in particular.
Maintaining a high standard for which clients have to pay rather than giving away intellectual property and competing with millions of enthusiasts with good cameras.
Working out what time in the day is work and what is play. This may sound strange, but being a wildlife photographer means that work and play morph into each other effortlessly. It is important to extricate yourself from both successfully and understand very clearly where one ends and the other begins.

What has been one of your biggest challenges?

One of the most difficult things for me has been balancing my life as a mother and entrepreneur.  I had a child at 45 and this was a time when my career as an underwater photographer was gaining momentum. I had stopped practicing law about four years previously. Despite my son being the best creation I ever made, it is also fair to say that my career had to take a different path, for a while, as a result of his birth.

Is it not a bit intimidating to get so close to sharks while photographing them?

I have had some exciting moments involving swimming or diving with sharks. They tend to be curious creatures. I have not yet felt particularly threatened but when a shark swims through your legs and you only see it as it comes out in front of you, there is always a moment of intense panic, no matter how many times you have swum with them.  Any day on the annual Sardine Run, when you get a bait ball of sardines is a day that builds up hundreds of amazing memories.

Is there a day that really sticks out as being one of the best?

Definitely. I was in Sodwana Bay in 2014 when I swam with two whale sharks, six dolphins and three humpback whales at the same time and in the same moment. It was one of those ‘Walter Mitty’ moments where I was so stunned that I didn’t want to miss the scene and I didn’t even take a picture. It was all over in about 10 seconds as nothing stays the same for long in the fluidity of the ocean.  I will never forget that 10 seconds and those moments, for me, are life-changing.  What I mean by that is that I apply the thought and feeling of that specific moment to many of the things I do and think. I think that gives me a positive outlook on life, in general.

You’ve spent a lot of time in and around the oceans. There’s great debate over how big a problem our oceans are currently facing. Where do you stand?

I am perpetually concerned for the oceans of the world and all of their inhabitants. Most people have concerns around whales and dolphins but very few people know, e.g. that if just one sea cucumber is picked up from the sea floor, a myriad of smaller animals living on it die too. There are so many small and microscopic creatures that rely on the ocean retaining its balance. Very little in our world is balanced at the present. However, a few of the protected areas that we do have, have shown us that the sea can bounce back strong and hard. I read today that 21 marine protected areas have been proposed for South Africa. I think that is the best news have read in years. There will be opposition of course, but the benefits of MPA’s are well known to scientists and those who care for and study the sea and our effect on it.

What are your biggest concerns for the oceans?

I have been diving for more than 20 years and I have seen a decline in the numbers of fish, and in particular, sharks. I have seen turtles becoming increasingly petrified of interactions with divers. I am hopeful that the world is awakening to the need to protect our oceans. I see this message being spread far and wide all the time and from what I can tell the message seems to be making inroads. It’s happening much too slowly though. I urge everyone who reads this to pick up as much plastic as you can whenever and wherever you see it, as likely no-one else is going to do it.  If that is all you can do to help, then do it, as it’s one of the best things you can do for the ocean.

How important is conservation to you?

I am a director of a conservation education NGO called Sharklife (www.sharklife.co.za). I give talks around the Garden Route on the plight of sharks in our oceans. I am also a representative for SASSI (the South African Sustainable Seafood Initiative), which is part of the WWF. I also give talks on the state of our oceans and overfishing, trying to urge people to become more conscious of their seafood choices.  Annually I arrange the local “paddle out for Sharks” – the Mossel bay chapter of this event. The idea behind the ‘paddle outs’ are to raise awareness and build advocacy for sharks.

Do you think divers are responsible for damage caused to reefs?

I think the reef takes a beating in any event from natural events such as huge waves and storms. I am not sure that over-diving is a major cause for concern when it comes to damage to the reefs. Many divers I know try to be very careful not to crash into or disturb the corals.

Any last advice for photographer wannabes?

I believe that true photographers cannot be ‘made’ by training and most, if not all, are born with the ‘eye’ for a photograph. Photographers often see life as a series of pictures.  This innate ability includes the sense to know when a shot has the ‘wow’ factor that everyone is chasing. There is definitely a very positive side to being able to travel and interact with all sorts of incredible animals in exciting and strange countries. It’s certainly an adventurous life. If you can make money out of it and make it work for you then it is just as ‘romantic’ and incredible as it looks. A person doing this job has to be incredibly flexible and prepared to travel in less than luxurious and sometimes downright dangerous situations.