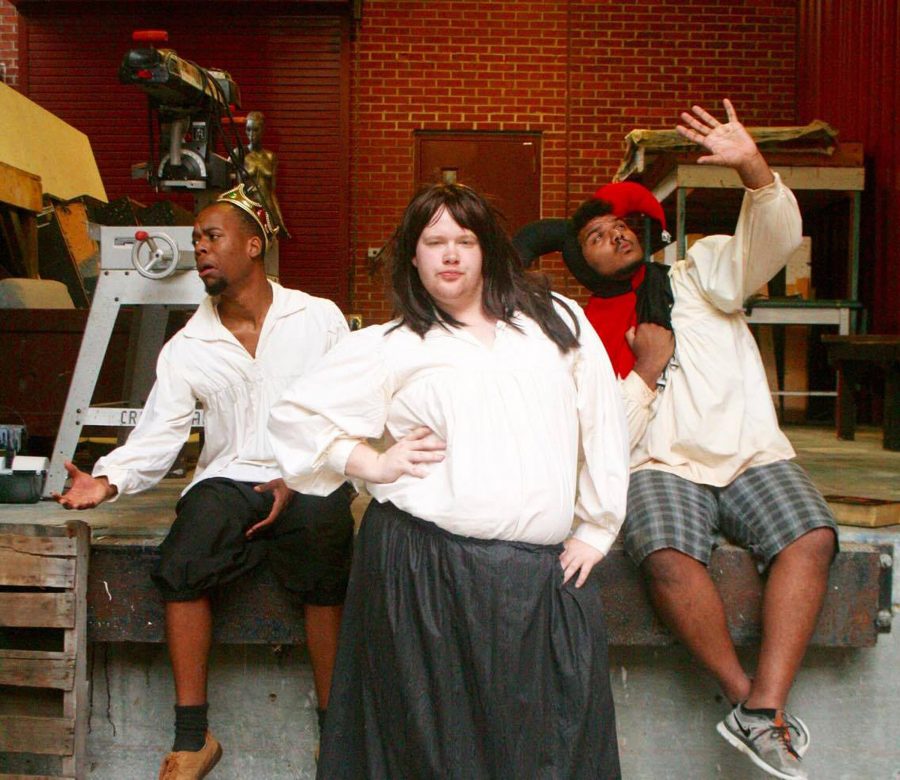 This past weekend, the Armstrong Masquers Theater Troupe performed, “The Complete Works of William Shakespeare (Abridged)” in the Jenkins black box theater. The play, directed by Evan Goetz, featured the actors Jojo Ward, Rayshawn Roberts and Joey Timmons. The production provided a concise, comedic and creative approach to summarizing the William Shakespeare anthology.

The challenge put forth by the title comes across as very daunting but the play itself is written in a way that is accessible to any patron. Audience members of any literary temperament will find something to love about this play: both students who finds themselves anxiously flipping through “No Fear Shakespeare” and the avid Shakespearean scholar. I’d go as far to say that even someone with no interest in Shakespeare whatsoever could find this to be a hysterical gateway into his literature.

The set was designed to look as if the pages of Shakespeare were “coming to life.” The stage backdrop consisted of books placed together to form Shakespeare’s face. There were also written pages stuck to the walls of the theater along with three podiums seemingly formed by the pages of his works.

The play reveals itself early on to be a multifaceted endeavor. The number of different approaches that the cast implements is staggering. The cast performed Shakespeare in every way imaginable—From a rap synopsis of “Othello,” to a freudian psycho-analysis of Hamlet’s “Ophelia,” to a football play-by-play of historical rulers, to even a cannibalistic cooking show. All genres were covered.

A major part of the plays charm was the respectful homage paid to the classic text coupled with the seamless integration of modern or improvised punchlines. These lines were delicately placed so well as to match and even rhyme with the original lines. This breathed a bit of fresh air into some of the more well known moments in Shakespeare.

Actor Jojo Ward explained how they handled the improvised portions of the play and decisions regarding what was kept and what was cut.

“The script left us a little free room to improvise. Of course you can always adlib little bits here and there. We always tried new and fresh ideas in rehearsal. And if they didn’t work or they didn’t feel right, we would change it.”

Jojo also mentioned having to be told not to “ham” it up too much for some parts of the play.

When asked about her favorite part of the play, sophomore Olivia Wright responded, “I loved the whole thing. I laughed the entire time. My favorite part is a tie between the audience participation in Act 2 or the re-enactment of Romeo and Juliet. The actors did a great job with the improv and everything else.”

Bill himself would be proud.