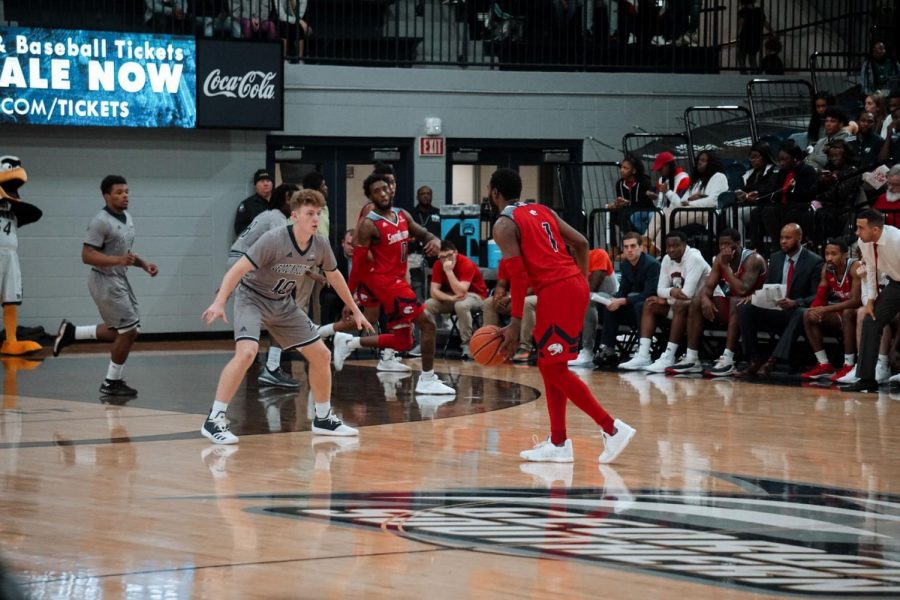 Freshman guard Calvin Wishart (10) logged a career-high of 14 points Wednesday night against the University of South Alabama, contributing to his now 114 total points on the season.

The Georgia Southern men’s basketball team takes on the 11-13 Troy Trojans Friday night. The Trojans are currently 3-8 on the road and 4-8 in conference play.

Going into this game, GS holds a 15-10 record and 7-5 conference record. They are currently placed third in the conference behind Georgia State, Texas State, and University of Texas-Arlington respectively.

The Troy Trojans will travel to Statesboro for a nationally televised game Friday night. Coming from a fourteen point loss at Georgia State in Atlanta on Wednesday, they are 11-13 overall and 4-8 in the conference.

Trojan senior forward Jordon Varnado is averaging 21.5 points per game and has scored 78 points in the past three games. Sophomore forward Javan Johnson is an essential component to the team, averaging ten points and four rebounds a game.

Troy is currently placed second to last in the conference, above Appalachian State. The game will be streamed on ESPN 2 and tip off is at 9 p.m.