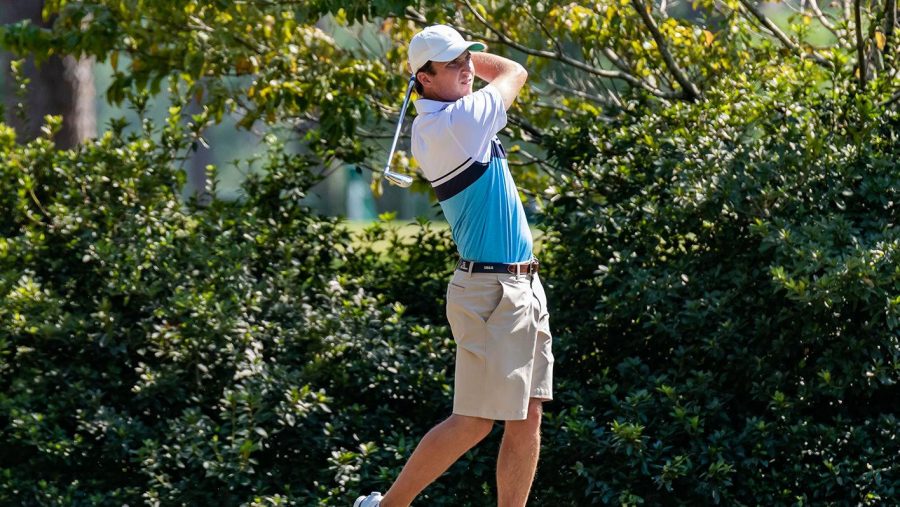 Senior Steven Fisk has won a variety of awards for golf inside the Sun Belt, including 2015-16 Sun Belt Freshman of the Year and 2017-18 Sun Belt Golfer of the Year.

Golfing most of his life, senior Steven Fisk has continued that by playing at Georgia Southern for almost a complete four years and his success on the course has proven that his mark has been made in Statesboro, as well as all over the country.

Fisk started playing golf around the age of four, when his parents built a course 9-hole course in his backyard and from then on, he grew to love the game. His talent has led him to earning the titles of 2017-18 Sun Belt Golfer of the Year, 2017-18 three-time Sun Belt Golfer of the Week and 2017-18 first-team All-Sun Belt.

“The facilities we have are really, really good,” Fisk said pertaining to why he picked GS. “It’s less than three hours from home, it’s in-state, I really like the coaches that are here and the small town feel that Georgia Southern has to offer.”

Fisk was named Sun Belt Freshman of the Year during his first season and posted four top-ten finishes in his first run as a collegiate athlete. During his sophomore year, Fisk led the Eagles with a average score of 71.5 and went on to win medalist honors at the Sun Belt Championship.

His season junior year was filled with a numerous amount of highs including setting a new school record with an average of 69.78. Fisk spent the majority of his season ranked in the top ten for the U.S. Palmer Cup team and then became the first GS men’s golfer to gain an NCAA Regional at-large individual spot since Bo Fennell in 1991.

“I’ve gained a lot of maturity since I got here my freshman year, on and off the course,” Fisk said. “We do a lot of traveling and we get to go to a lot of cool places and that grooms you into being more of an adult.”

His growth through the seasons has shaped him into the person and golfer he is today. While there is so much Fisk has in the bag, there is still the rest of the season ahead and many more opportunities to learn and experience.

“I’m excited for the team that we have and what we have left,” Fisk said about his last season. “We have the whole semester left and a lot of good work to do, but yeah it’s going to be sad when it’s over with, I try not to think about it.”

“I’ll definitely try to play golf,” Fisk said. “I don’t know if I’ll turn professional after NCAAs are over in May or if I’ll wait until the fall, we’ll just have to see how this semester goes.”

Fisk has most definitely been an asset to GS athletics and fans will continue to see him succeed on the course for the remainder of this season.