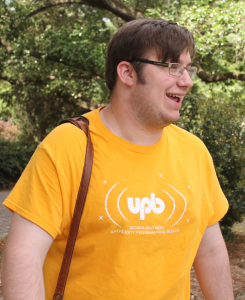 On Aug. 24-26, Armstrong’s Masquers Theatre Department presented a revival of its summer show “The  Underpants”, a comedy written by Carl Sternheim and adapted by Steve Martin.

Set in Dusseldorf, Germany in 1910, a married couple deals with the predicament of the wife’s bloomers falling down in public at the king’s parade, resulting in two suitors pursuing her.

The play was first published in 1910 by German playwright Carl Sternheim. “The Underpants” along with his following plays and short stories combat the ideals and values represented by the bourgeoisie class of that time.  Comedian Steve Martin adapted the play for modern audiences. The play premiered in 2002 and is still performed across the country by colleges and local theatres alike.

“The Underpants” centers on husband and wife, Theo and Louise Maske, who squabble throughout the play. It is made clear that Theo does not think of Louise as anything more than a housewife and does not pay much attention to her.

The two men who saw her underpants drop in public include a dashing poet named Versati and a sickly barber named Cohen. In their pursuit of the wife, the two apply for a room the Maskes have for rent.

To make matters worse, Theo does not seem to notice that the men are flirting with his wife, and he decides to split the room up between them. Even though in that time period pursuing an affair was strictly frowned upon, Louise elicits sympathy from the audience. Louise’s character exudes loneliness and eventually gives in to the men who offer her the affection and kindness she deserves.

Meanwhile, their nosy upstairs neighbor Gertrude overhears everything and becomes Louise’s confidante as she tries to navigate Louise’s tricky situation. Gertrude encourages her to give in to her suitors and even makes her a pair of bloomers for the occasion based on the German flag.

The play culminates in an unexpected way when Versati leaves the apartment because he wants to be with a prostitute, and Cohen leaves because he no longer has to compete with Versati.

Theo surprises Louise when he tells her that due to the extra income provided by renting out one of their rooms, they are now financially secure enough to have a baby.

The final scene of the play presents a huge plot twist, when the king visits their apartment to give Theo a promotion and to ask if they have a room for rent, hinting that the king also saw Louise’s immodest display at the parade.

“The Underpants” is full of the comedic repartee expected from a play adapted by Steve Martin. The productions were full of innuendos and physical comedy paired with witty dialogue.

The play was directed by Geoffrey Douglas who also directed last fall’s Blackbox Theatre’s production of “Desdemona: A Play About a Handkerchief.” “It was a great experience! It still got as much work put into it as any other show despite being a summer show. Everybody in the cast got along really well,” senior, theatre major Whatley elaborated.

Initially, Whatley read for the role of Louise. “I didn’t have a preference going into the audition since I haven’t done that many. The director had me read for Louise, but then I was cast as Gertrude. Once I was able to read the script I realized how much fun it would be to play her because she’s so saucy and funny. She had a lot of great lines,” Whatley explained.

Junior, nursing major Alyssa Frederick has attended many Armstrong productions and she enjoyed this one just as much. “It was very well done! The actors did a great job and it was a pleasure to watch. It certainly, must have been a controversial play when it was originally performed in the early 1900s,” she remarked.

Masquers will present its next plays in the Blackbox Theatre with “The Revolutionists” on Sept. 28-30 and Oct. 1, and “Blithe Spirit” on the Main Stage Oct. 26-29.