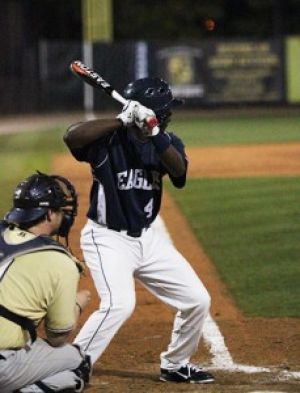 Georgia Southern kicked off the Sun Belt Conference play on Wednesday night, but the Eagles’ first season home game versus Arkansas State did not go as they had intended.

GSU, as well as Armstrong students, finally got the chance to see the Eagles play in person after enduring three GSU performances that can only be described as lackluster. Many thought that the home atmosphere may help, but it seemed that it had little effect on Arkansas State. After a slow first quarter, Arkansas State’s offense lit up the scoreboard. They had a 19-point second quarter and a 14-point third quarter, while the Eagles scored only 14 points in that span.

The final score ended up being 43-25. GSU got the ball back with around nine minutes remaining in the fourth down 36-25, but once again the offense couldn’t bring the Eagles back into the game, and Arkansas State would seal the game with a late fourth quarter touchdown on the following drive.

After a 1-2 start from Arkansas State, who are the back-to-back Sun Belt Champions, GSU believed they could take out the Red Wolves early on their journey to a three-peat. Arkansas State’s offense, however, overpowered GSU’s sub-par defense, ran away with the game and did so practically without being touched. The three touchdowns that the Red Wolves scored were basically wide-open plays that resulted in big scores. Quarterback Justice Hansas of Arkansas State would connect with wide receiver Chris Murray for two 50+ yard passing touchdowns while Arkansas State running back Warren Wand capped off the 21 point run that Arkansas had brought through the second quarter to make the game 36-17 and take the crowd and the Eagles out of the game.

GSU quarterback Shai Werts struggled throwing again, with only 160 yards passing, one touchdown, and two interceptions. He added 112 yards rushing on 29 carries. Running back, Wesley Fields had a solid outing posting 72 rushing yards and one touchdown with 17 carries. Monteo Garrett busted the biggest scoring play on his 74-yard touchdown run, while L.A. Ramsby would add another 65 yards on the ground. Wide receiver Obe Fortune led the receiving for the Eagles posting 70 yards and a touchdown on three receptions.

Once again, GSUs lack of a passing game, poor third down percentage, and lackluster defense resulted in another loss to start the season 0-4.

This was a big win for Arkansas State and a huge loss for GSU. The season clearly is going in different directions for both programs, but optimists may think GSU can turn it around with their history of being a winning college football program.

GSU plays their Homecoming game Saturday, Oct, 14, as the Eagles host Sun Belt opponent New Mexico State. Kickoff for that game is set for 6 p.m. and will be televised on local networks and ESPN3.

Remember, as an Armstrong student with a valid student ID, you get into every game for free! So go out and support the Eagles at Georgia Southern Homecoming and get involved with Georgia Southern and everything it has to offer.