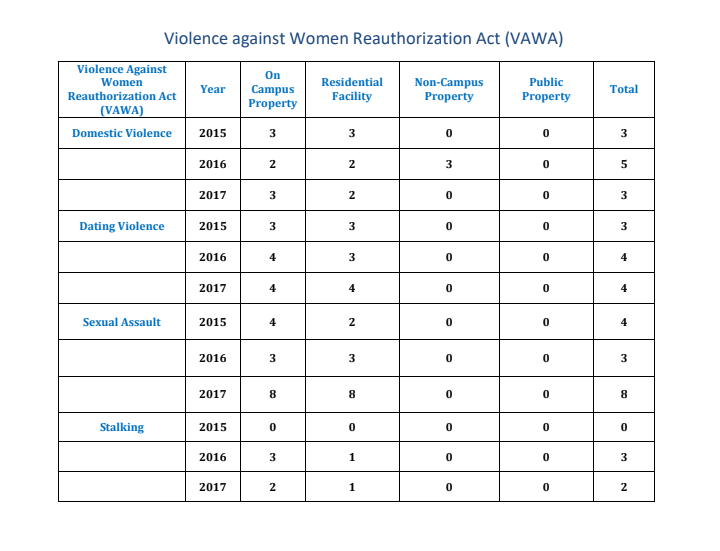 The graph above displays statistics of violence against women from fiscal years 2015, 2016 and 2017.

In accordance to federal law, the Division of Public Safety is requesting for employees and students to report undocumented crimes for the Clery Act.

The act was put into place after the rape and murder of 19-year-old college student Jeanne Clery in her dormitory. Clery’s parents believed the university had failed to share vital information with the student population regarding campus safety, and demanded legislative reform in 1986.

Four years after their daughter’s death, they were able to establish The Student Right to Know and Campus Security Act of 1990 which required colleges and universities to report campus crime policies and statistics. The act was renamed the Clery act in 1998.

Colleges and universities must report offenses that occur on campus, in residential facilities, on non-campus property and on public property. Such crimes that must be reported include:

Clery Compliance Coordinator Rebecca Rhinehart said in an email that crimes that have occurred on campus in 2018 that were not reported to the police department should be reported no later than June 1, 2019.

Rhinehart also stated in the email that serious crimes that may cause an ongoing threat to the campus community is reported to anyone on campus should be reported as soon as possible.

Those who have questions about this request or you would like to discuss the specifics about an incident may contact Rhinehart at 912-344-3205.

These concerns may also be directed to Public Safety Chief Laura McCullough at 912-478-5234.

According to the 2017 Clery Act, incidents reports in most areas have increased compared to the 2015 and 2016 reports.

Incidents of aggravated assault increased from two incidents in 2015 and 2016 to five in 2017.

Incidents reported through the Violence Against Women Reauthorization Act decreased slightly in all areas except sexual assault, which had eight incidents in 2017, compared to seven in the 2015 and 2016 reports.

Public safety keeps a Timely Warnings log that reports on and off-campus incidents on the Georgia Southern and Armstrong campuses.

Crimes reported in the Statesboro can also be tracked on CrimeReports.