Eagles Sour Over Panthers, Take on UTA Next 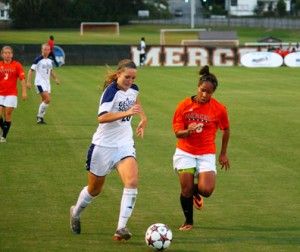 The Eagles picked up a major win over rival Georgia State at Hanner Fieldhouse on the 16th, and with that victory they kept a much-needed, top-three seeding in Sun Belt Conference.

The Eagles, who possessed a three-game losing-streak entering the game needed the victory to get back into the win column. The Eagles never trailed in the 85-80 victory, with their leading shrinking and gaining throughout the game.

One big game-changer in GSU game, was the early foul-trouble to the Sun Belt’s leading scorer D’Marcus Simonds from Georgia State. The sophomore Guard from the Panthers, who averages 21.6 points per game had two personal fouls within the first three minutes of the game which cut down his aggressive nature against the Eagles defense throughout most of the first half.

Once again junior Guard Tookie Brown led the way for the Eagles offense, posting 23 points, 9 of which came from the charity strike. The Eagles shot an impressive 47% from the field and made 25 total free throws on the game. The Eagles led the game for 39 of 40 minutes, with the other minute being tied.

The Eagles moved to 17-10 overall and 8-6 in SBC play, which kept them in the number-three-spot in the Sun Belt standings behind top ranked Louisiana and second place Georgia State. The Eagles also improved to 8-3 at Hanner Fieldhouse this season, posing their home-court-advantage.

At this point in the season, the Eagles and every team in the Sun Belt need victories for seeding in the Sun Belt postseason tournament. The Eagles play UT Arlington and Texas State on the 22nd and the 24th of February, and both of those teams are in the middle of the standings and looking for a late-season surge. For the Eagles, they are looking to stay in the top four and gain a first-round, bye. in the Sun Belt tournament.

Only two home games remain on the schedule for Georgia Southern. They host South Alabama on Thursday Mar. 1st and finish the regular season at home vs. the Troy Trojans on Saturday Mar. 3rd. Go see the Eagles for the last time at Hanner Fieldhouse on both of those days and remember, go Eagles!