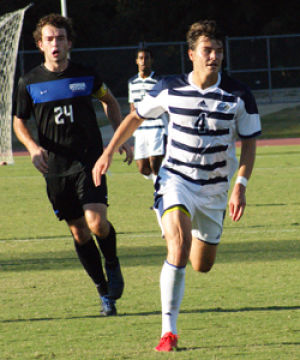 As most Armstrong students were getting ready for Spring Break, the Savannah Stopover Music Festival pervaded the streets of downtown with the sounds of artists from all over the country and from further abroad. Stopover hosted an incredible exhibition of talent from eighty-three bands over three days. It provided an abundance of musical choices to be shared with neighbors and friends.

The first night of Stopover started with roots rock ‘n roll sister duo, Larkin Poe, in the open-air venue of the Ships of the Sea Museum. The highly energetic sister act was highlighted by Megan Lovell’s slide guitar and Rebecca Lovell’s sultry and penetrating vocals.

Armstrong students, Lakin Crawford and Carson Dover played in a couple buildings down at the Social Club; their sound reminiscent of the 90s indie-rock band, Pavement.

The funky swagger of the band The Medium, included a moment when front-man, Shane Perry kicked over a stack of “Titanic” (yes, the movie) VHS tapes propped up around his stage.

Though the lead singer did not ride a live horse onto the stage, Of Montreal delivered incredible visuals and theatrics during their performance, including an appearance by a chain of linked balloons passed through the crowd and a family car-sized opossum puppet.

At Ships of the Sea again, the all-ages venue was filled with fans singing along to Gus Dapperton’s throwback injection of The Beatles’ “Twist and Shout” amid their own indie-pop hits.

Many performers came from the east and west. From Brooklyn, Future Generations put on a show that was wonderfully energetic and refined, sounding right and ready for the national spotlight while LA-based post-punk band French Vanilla capped opening night with a unique blend of punk and jazz sounds with aggressive female lead vocals.

Bringing their self-described “tropical futurist” sound all the way from Colombia, South America, Combo Chimbita played a set that was all at once brooding and euphoric, raw and layered, encouraging the entirety of El Rocko Lounge to dance, demand an encore, and dance some more.

The sublime harmony of The War and Treaty took everyone to metaphorical church in (literal church) Trinity United Methodist. Trinity’s acoustics were perfectly suited to highlight the range and power of the husband and wife duo Tanya and Michael Trotter, and they explored a sound bursting with soulful energy and ripe with emotion. At certain moments, nearly everyone in Trinity was clapping and stomping while others in the crowd held its breath to better hear a particularly rare note brought forth from the couple.

Local acts were mixed in with the touring groups, highlighting the talent present within our own city. Cusses drummer Brian Lackey exploded through a set while surrounded by mirrors echoing his own movements in Club One. Barrelhouse South hosted sad-but-warm indie-pop artist Ryan Jones for one of her first shows in Savannah. Gracing the same stage was Nancy Druid, a project of Savannah music scene veteran Anna Chandler who has created a veritable Savannah super-group by combining the talents of Ethan Stewart on guitar, Ian McCarthy on synths and Jeremy Hammons on drums, all of whom add flesh to the bones of her own solo work and create forceful, driving melodies with irresistible danceability.

The consecutive shows were all within walking distance of one another, and fans were able to discover new music through the flow of concert-goers and friends going from one venue to another or even just by trying to secure a great spot prior to an anticipated show. The abundance of choice means that there was something for everyone and discovering new and up-and-coming talent is perhaps one of the best things about the festival. But far and away the greatest thing is this, it happened here, in our own backyard. We’re lucky to have a town that can draw such talent and contribute so much of its own. Until next time!