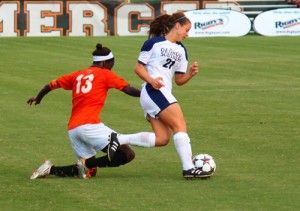 Sophomore defender Jessie Eberhardt (21) steals the ball from junior forward Washida Blackman (13). The Eagles have the opportunity to leap up the conference standings with a victory against Elon University.Photo by: Ryan Woodham

An upper division Spanish class has been dropped for unknown reasons. The concern over the class arose from the fact that it is needed for students to graduate. As of this writing, fifteen students will be affected by the class removal with potentially more at stake in the future. Jessica Hyers, speaking on behalf of those affected by the dropping of the class, requested help from the Senate to have the class reinstated. She has gone to multiple advisors with little progress and has now turned to SGA. She brought with her a petition for reinstatement. Senator Selmman Padridin and the committee of Academic-Student Success have connected with Miss Hyers in support of her goal.

Senator Padridin presented a proposal for new chairs in University Hall. After receiving complaints from students about their poor condition, with some saying that the chairs had pinched them, he investigated the most used room and found several rooms with damaged chairs. He and the committee of Business and Finance are sponsoring the proposal. Voting for said proposal will occur next week.

SGA elections are set to take place April 2nd through April 4th. Last year, pole returns did not even eclipse two hundred people. The goal for this year is to get at least seven hundred voters despite some non-contested positions. Executive Vice President debates are to take place March 28th at 5:30 pm.

A Town Hall, open to all students, will take place next Monday, April 2nd, at 11:30 am. The Town Hall will encompass multiple ballrooms in the Student Union. It will be followed by the regularly scheduled SGA meeting.