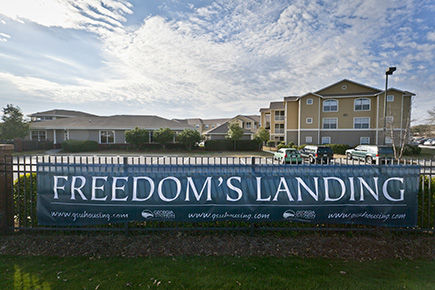 Freedom's Landing will be the only on-campus housing option for upperclassmen next semester due to an expected increase in fall 2019's freshman class.

Freedom’s Landing will be the only on-campus housing option for upperclassmen next semester due to an expected increase in fall 2019’s freshman class.

Blutreich said based on the results of a survey for returning students, Freedom’s Landing will have the space available to meet the demand for upperclassmen.

“After resident advisor selection and placement other spaces on campus will be made available contingent on, specific documented student needs, capacity and available space,” Blutreich said.

Freedom’s Landing was chosen because it is seen as a better environment for upperclassmen rather than freshmen, Blutreich said.

“Freedom’s Landing is a much more conducive environment for an upper class community of students to live in as opposed to placing first year freshman students in that same location,” Blutreich said. “Certain styles of residence halls are better for building community and focusing resources that are critical during a student’s first year.”

Blutreich said the closure of Kennedy due to black mold last semester also had an effect.

“The Kennedy closure shifts 350 plus freshman year students into other housing options. Therefore our available occupancy must be managed,” Blutreich said.

Despite these numbers, the number of students requesting to live on campus has increased over the past two years.

“We have had an increase in returning students requesting to live on campus over the past 2.5 years since my arrival in June 16,” Blutreich said. “With just a little effort from June 16 to 17 we increased returning students by 2 percent for the Statesboro campus.”

As University Housing members calculate the size of the fall 2019 freshman class, other options will become available.

“We anticipate opening up other options for upperclassman students as again we get a clearer picture of how many first year students we will be housing for fall 2019,” Blutreich said.