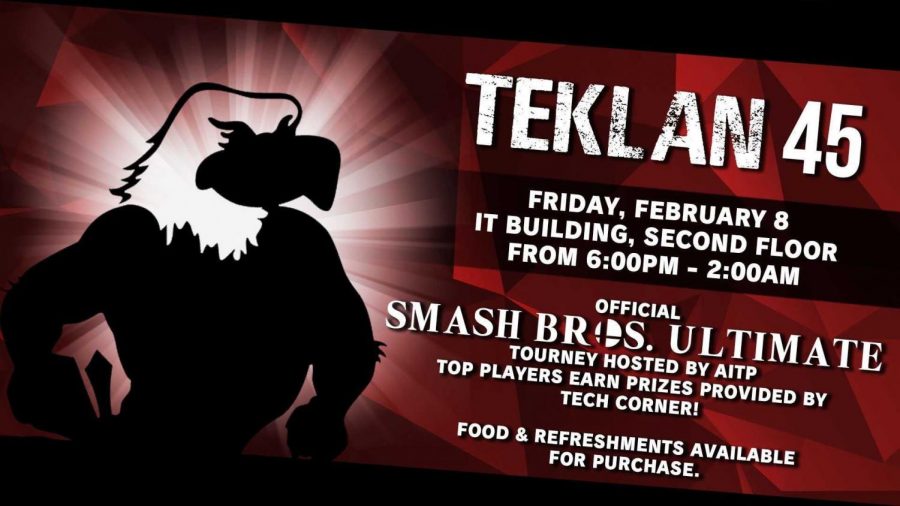 TekLAN is Friday in the IT Building from 6 p.m. to 2 a.m. There will be a Smash Bros. Ultimate Tournament with prizes for winners.

TekLAN is a bi-annual gaming event at Georgia Southern University, according to the TekLAN Facebook page. The event is open to all GS students and there will be concessions available.

Attendees are encouraged to bring their own gaming consoles, according to the GS event calendar.

“We are lucky enough to have a lot of orgs willing to participate and help with the event,” Usry said.

AITP is also hosting a Super Smash tournament during the event. According to the TekLAN poster featured on the GS event calendar, top players will win prizes provided by the Tech Corner.

Usry said that the prizes will consist of headphones, speakers and keyboards. The first place winner of the Smash tournament will also have a $50 donation given in their name to Eagles for Eagles.

The Geeks n’ Gamers club is one of the sponsors for the event. Elvis Mack, president of the GnG club, said that Super Smash Brothers Ultimate tournaments usually garner massive attendance. Mack hopes to show newcomers how fun tournaments can be at TekLAN’s Smash tournament.

“Super Smash Bros. Ultimate has exploded the university since its launch in December,” Mack said. “This will also be people’s first experience of a tournament, so our hope is to show them how fun they can be competing with others and making friends and rivals that will last for years to come.”

“I love the environment, getting a chance to relax [and] socialize and game with old friends and new friends,” Usry said.

Mack said that TekLAN is a gaming event that players of all types can enjoy as well as explore various gaming genres.

TekLAN has grown at GS immensely since its start as a small event ran by a few friends and clubs. Now the event is open to everyone on campus and is run by four GS organizations with over 1,000 students.

The event takes up the entire second floor of the IT Building, Mack said.

“The event has become a major event for gamers at Georgia Southern,” Mack said.